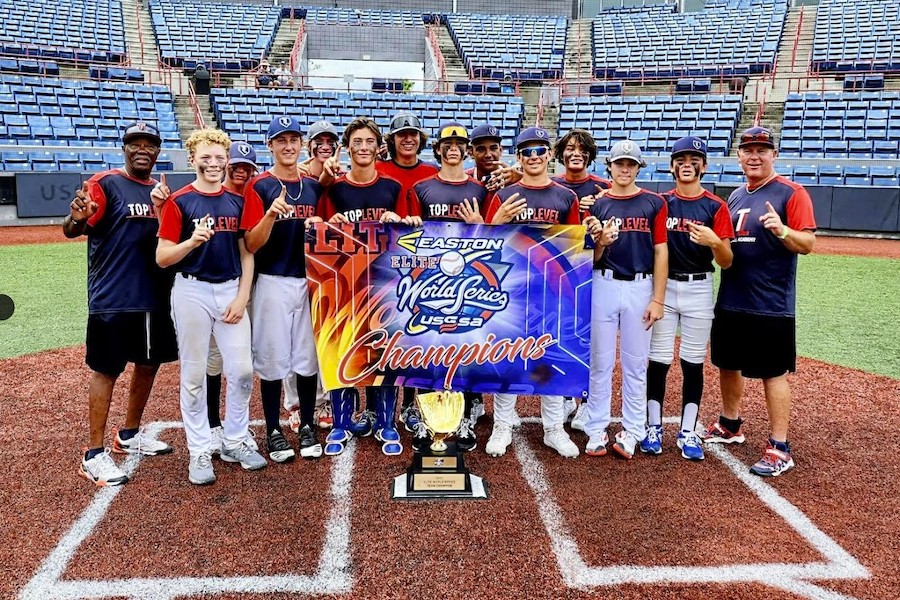 For a long time, the best baseball players on the Westside have been obligated to go to the South Bay or the San Fernando Valley to get the best training for the sport and to advance to teams that play on the national level in scholastic sports. This is no longer the case.

Coaches Eric Beckerman, Zach Smith and John Urena founded Top Level LA Baseball Academy on the Westside to address this lack of high-level coaching for students in the area and even after some serious challenges this season, including one coach having a heart attack, the Academy is now the home of the 2022 Easton 14U USSSA Elite Florida World Series Champions and the #1 ranked 14U team in California.

We spoke to Coach Beckerman about the challenges and the triumphs of this season and how they got a brand new team and training facility to the championship in such a short time.

Dolores Quintana: Could you give me a little bit of a background on how this came about.

Coach Eric Beckerman: Sure. I am the Crossroads high school coach in Santa Monica. I got the job three years ago, and started a start a new organization to help develop players in the Santa Monica and westside areas. But then the COVID pandemic and came along and we got shut down for a couple of years, obviously. When things finally broke, in the summer of 2021, we were able to quickly get the program back up in July which became very popular. Then we formed a 14-year-old team in September. We set a goal to win a qualifying event for the World Series in Florida. The team actually didn’t do very well the first few tournaments, but then started to improve and get better. In February, their coach had a heart attack, but he was okay. He was going to have open heart surgery that got moved to July. He was able to return to the team about a month after taking it easy. In the very final qualifying tournament of the year at the end of April, that team really played well and came together. They ended up winning the tournament to qualify for the Florida World Series in July. This happened three days after their coach was scheduled to have open heart surgery.

So there’s a lot of uncertainty because the team hadn’t won one unit the very last tournament and the coach wouldn’t be available. There was uncertainty if the team would even go, even though that was the goal from the get-go. We had a meeting with everyone. We got everyone in the same room and said, Yeah, let’s go. We we’re able to go with the core of the team. I had actually been to the tournament three other times with very strong teams. All those teams had always sort of underachieved compared to the talent level of the teams. I wasn’t really sure if it was the humidity or the three-hour time difference or the strong level of competition. But the teams had always underachieved. When we were in the very first game of the tournament of Florida. we were actually losing two to nothing as we were going into the very last inning.  I remember thinking, “Here we go again.” You know, why do our teams just not do well in Florida? But fortunately, the the team broke it open in the very last inning and scored seven runs to win seven to three and then they really never looked back after that. They were almost dominating every team after that and ended up being the top-seeded team from Florida, North Carolina, South Carolina. Lucky in the championship game they beat the number one ranked team from Texas six to one to win the World Series.

Dolores Quintana: How did you, as a coach, how did set up the program? From what I understand, before your academy, if players wanted to get the best coaching and play nationally they had to go to the San Fernando Valley or to the South Bay.

Coach Beckerman: It was when me and my assistant coach, Coach, Zach, got the job at Crossroads. A lot of the players from Santa Monica and the Westside did have to leave the West LA area and go to San Fernando Valley or east or down south to South Bay to find high-level development. There wasn’t a lot of high-level development in the local area. Crossroads, it’s not an easy school to get into. But we figured the more we could develop the players from Santa Monica and the Westside, obviously, the ripple effects would help any players that do play at Crossroads or get into the school at Crossroads. So I hired a lot of very high-level coaches and put together a very high level training program for those that really enjoy putting in the work to get better. You know, there’s always a couple of different types of players. There are players that enjoy the game of baseball and like to come to the games and there are players that enjoy training for getting stronger, getting faster, and putting in a lot of work. We’re here to optimize their development.

Dolores Quintana: How long does it take to develop a top level team?

Ah, that’s a great question. I always tell people, that it really takes about three years for a player who really wants to take their game to the next level to really see the results of their efforts. Baseball is a very difficult game and usually takes three years. But the program we developed at a top level, the coaches we brought in and the training programs we put together, you really saw a lot of results. Basically within nine to 12 months. It was a lot quicker. I remember when the Coach Steve first took over this 14U team that went to Florida, he was very unsure. This was the type of team that could compete at that upper level. But with his leadership and the other opportunities to develop that the players on this team definitely took advantage of? It really allowed them to develop a lot quicker than we normally see.

Dolores Quintana: It seems like you got it off the ground really quickly.

I had run a trial run at an organization down in the South Bay, in the Manhattan Beach area for 10 years that was very successful in developing high-level players. But it was just a little too far for kids from Santa Monica, West LA and the Pacific Palisades to go to. So when I was offered the job at Crossroads in Santa Monica. I wanted to bring that same sort of business model from what we had done down south to the Westside. I had a name out there and already sort of a foundation built-in and an idea how to do it which definitely played a big part in getting it off the ground so quickly and having success so quickly.

Dolores Quintana; What do you see in the future for the program?

That the program continues to gain traction. We’ve never spent $1 on marketing or advertising or things of that nature. The word of mouth has just really allowed the program to continue to grow and develop players. It’s more than coaching, it takes more like what the parents are willing to contribute on their end as parents. It i’s the players themselves that play a big role in developing the other players. As the program grows, you see the players that come in, that really have the drive to get better at their craft, and that it’s just a continuous sort of inspiration that we see that come into the program that makes the kids really want to train hard. It’s fun to see. We’ve added a few new teams. We will now be starting at a slightly earlier age. We’ll start with players in the third grade to allow kids to really have access to at an earlier age to to develop. It’s getting tougher now if you wait until kids have gotten older to start training.