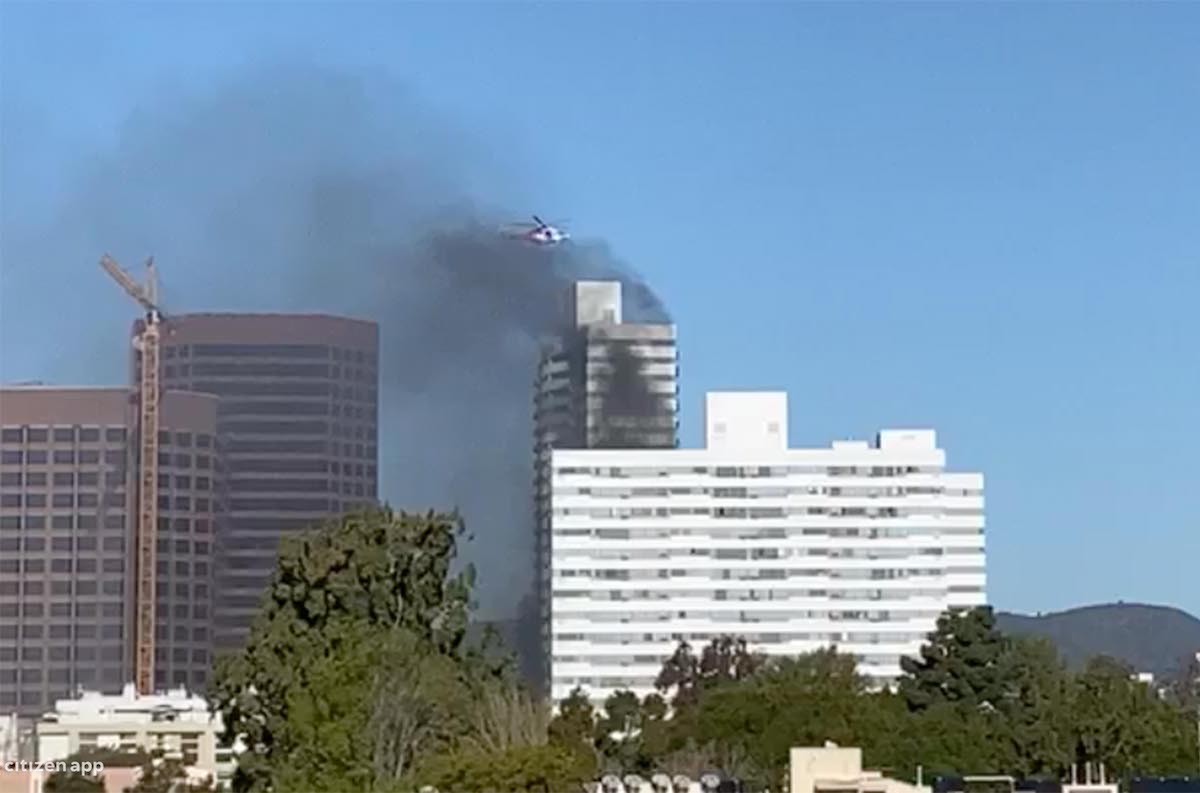 A 25-story high rise on Wilshire Boulevard in West Los Angeles caught fire Wednesday leading to multiple injuries, one of two fires in a three-block radius this morning.

According to Los Angeles Fire Department (LAFD) spokesperson Brian Humphrey, the fire was reported at 8:37 a.m. at a 25-story residential high-rise complex know as Barrington Plaza located at 11740 Wilshire Boulevard.

A total of 335 LAFD personnel responding by ground and air, and were assisted by the nearby Santa Monica Fire Department, LAPD Los Angeles Police Department and allied agencies in successfully managing the incident.

The fire’s cause remains categorized as “suspicious” by the LAPD and remains the focus of an active investigation.

The wind-driven fire was extinguished one hour and 19 minutes after it was first reported. There were eight civilian patients, most suffering from smoke exposure. Six were transported to a local hospital, including one person who was in grave condition, according to the LAFD.

“Despite reliable eyewitnesses vividly describing one or more persons ‘jumping’ from the 6th floor, we surmise that such person/s may have appeared, disappeared (returned briefly inside) and returned to the building’s exterior in an area heavily charged with smoke, leading the eyewitnesses to believe they had jumped rather than temporarily retreated into the building. It is likely the jumper/s in question was the man later safely rescued by an LAFD Firefighter atop an extended aerial ladder,” Humphrey said.

According to Humphrey, there were no firefighter injuries. The fire’s cause remains under active investigation

This incident is at a different location than the 6:30 AM fire that was three blocks east, Humphrey noted.

According to the LAFD, at 6:30 a.m. Brentwood, a different 26-story modern sealed high rise office building on the northwest corner of Wilshire Boulevard and San Vicente Boulevard caught fire.

The building had remodeling taking place on the three lowermost floors.

“Exterior scaffolding supported a tent-like protection ‘wrapping’ of those 3 lower floors that caught fire during a period of strong and sustained (35 mph+) wind, with flames swiftly extending into the first three floors. Most serious fire damage to the first and second floor, with multiple lower floor windows broken by the wind-swept flames,” Humphrey said.

Over 50 building occupants safely evacuated and fire sprinklers activated as designed on multiple floors, according to the LAFD.

One adult male civilian sustained smoke exposure and has been taken to an area hospital for further evaluation. His condition was not specified by officials.

The 126 LAFD Firefighters assigned had flames extinguished in 40 minutes

This story is still developing and will be updated more information becomes available.