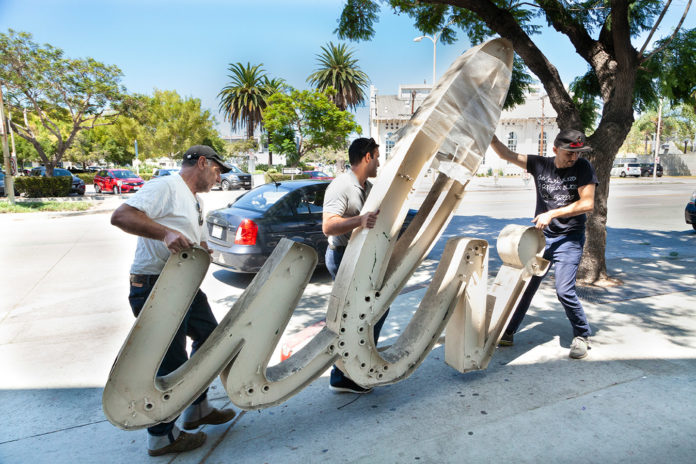 Construction has begun on a public market development in Culver City being billed as the Westside’s answer to Downtown’s Grand Central Market and a project that will see the restoration of the Culver Theatre’s iconic neon sign.

This month protective fencing and k-rail barriers were placed around two vacant lots at the intersection of Centinela Avenue Washington Boulevard where the 26,000-square-foot Culver Public Market will open in a little over a year.

21,605 square feet of vendor space and 184 parking spots are planned by developer Regency Centers, who has announced Urbanspace has signed on as the market’s operator.

“The market hall component is the anchor of the development, so we couldn’t be more excited to have Urbanspace as a part of the project. The company’s roots are authentic, and their markets in New York and throughout the U.K. are among the best we’ve seen.”

Urbanspace is known for connecting creative small business owners and chefs with curious customers by reaching out to new communities and spaces. Founded in 1972, Urbanspace first came to New York City in the 90s to open the Union Square Holiday Market.

“Chicago and LA are next on our journey to partner with authentic, value-focused entrepreneurs in finding the hungry crowds that crave them. Urbanspace couldn’t be more excited to discover what Culver City has cooking,” Urbanspace said.

In addition, San Diego-based Wicked Main Lobster has signed on to be a vendor at the public market.

The Culver Theatre opened on August 13, 1946, with a seating capacity of around 1,100, showing the film “Red Stallion”

Albert R. Walker was the architect of record and Carl G. Moeller was the design consultant. The design style was “Streamline Moderne” or “Art Moderne;” a later version of art deco architecture which was less ornamental and more ‘aerodynamic’ in look.