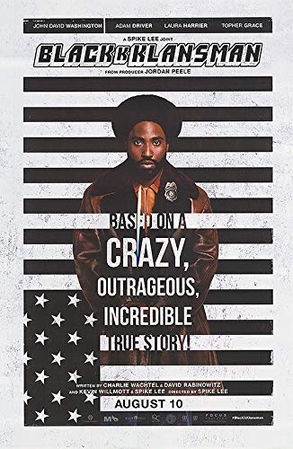 “BlacKkKlansman,” about a black police officer named Ron Stallworth, who with a white colleague named Flip Zimmerman (Adam Driver), infiltrates the Ku Klux Klan, is a very entertaining, provocative, and disturbing period piece based on a true story. John David Washington (Denzel’s son) plays Stallworth in a charismatic performance as the first African-American detective to serve in the Colorado Springs Police Department. Stallworth’s first assignment is to go undercover with a wire to attend a Black Panther rally featuring the radical black activist Stokely Carmichael, put on by the Black Student Union of the local college. While waiting in line to attend the event, Stallworth hits it off with Patrice Dumas (Laura Harrier), the president of the Black Student Union.

When Stallworth sees an ad in a newspaper for new Ku Klux Klan recruits, he decides to make a call at the police station pretending he wants to join.  Zimmerman is the fellow officer who steps in for Stallworth in person to aid in the investigation (always wearing a wire), as obviously a black person showing up would not work. The ironic thing is that Zimmerman is actually Jewish. While mainly against African-Americans, the organization (which they prefer to be referred to as The Organization) was also opposed to Jewish individuals. Thus, not only does Zimmerman have to pass as Stallworth, but he also must not let on that he is Jewish. Soon, though, Zimmerman finds himself fitting in with the organization and always speaking hateful rhetoric in their presence. The film demonstrates how any wrong step along the way could jeopardize the assignment.  A really tense scene occurs when while at a Klansman’s house, Zimmerman is told to take a lie detector test proving he is not Jewish. It is just he and a fellow Klansman, who soon pulls a gun on him.

Things unfold with The Organization calling Stallworth at work (that is the number he has provided them with) and Zimmerman tagging along for outings and meetings. Topher Grace shows up in an effective supporting role as The Organizations’ Grand Wizard, David Duke, who members look up to and greatly admire.

The narrative goes back and forth with the Klan storyline and that of the burgeoning romance between Stallworth and Dumas. What she does not know for much of the way is that Stallworth is an undercover detective. She merely sees him as a young black man who is along for the cause. This illustrates a theme of duality in the movie, which also surfaces with Zimmerman. I found that the romance these two characters had was warm and believable.

Things really go into high gear when Zimmerman finds out that The Organization wants to target Dumas and any other Panthers, which would likely involve a bomb going off and killing them in the process.

I found that the beginning of the movie, with old newsreel footage of Alec Baldwin going off on a racist rant, and the ending, which shows the actual footage of the recent Charlottesville protests, both take you out of the movie and draw attention to themselves.

Nonetheless, the film is unquestionably timely, not to mention well-acted and written. Dumas’ vocal support of black empowerment mirrors the Black Lives Matter Movement today. There is even a scene of police brutality toward the Panthers during a routine traffic stop. Also, though not as extreme as David Duke’s sentiments, the Charlottesville protests shown at the end and Trump saying that he wanted to ‘take America back,’ seemed similar.

While not an easy watch, the movie is a must see for how it skillfully illuminates bigotry in the 1970’s and makes parallels with our society today.