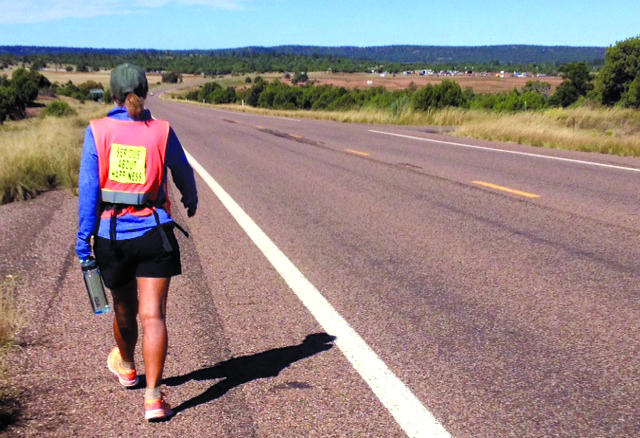 The 8,000-mile Happiness Walk and research project takes place Oct. 7 in Santa Monica with residents encouraged to join the nationwide initiative that circumnavigates the country by linking walking segments together.

The event has been designed to promote personal happiness, compassion and collective well-being while chronicling real life stories of people who join along the way.

Sponsored by Gross National Happiness USA (GNHUSA), a national non-profit educational and advocacy organization, the walk began in 2012 at Stowe, VT, en-route to the Pacific Ocean. After passing through Santa Monica, it will continue up the west coast.

I’ll join Paula Francis for a portion of the walk. Francis is co-founder and vice president of GNHUSA, and Chief Happiness Walker. “We walk,” she said, “because the policies and practices of our systems, institutions and our government ought to support and uphold our basic right, and that of future generations: the pursuit of happiness.”

Francis has been enamored with the idea of an economy grounded in happiness since first learning about the concept in 2008. Soon after, she became part of GNHUSA and traveled to Bhutan to witness Gross National Happiness in action. In 2014, Francis committed herself to The Happiness Walk full-time to further the goals of GNHUSA and to ignite a national conversation about what matters most in life to her.

The Santa Monica leg is the 11th of the walk since it began. Francis has walked the entire journey, reaching Santa Monica after 4,434 miles.

“Dozens of people have joined me along the way like you will,” she said.

Francis explained that her goal of the local leg resonates the fundamental values of GNHUSA: “1. To research common goals through conducting interviews with people I meet on the road, 2. to inspire conversation and action on the things that truly matter in life, and 3. to spread the word about a different way to measure success by expanding measures used in policy to include happiness and well-being indicators.”

This ambitious, humanistic project is centered on fostering unity and shared values in the current era of conflicting headlines and ideals. Francis said that she asks everyone she meets on the journey, “What matters most in life?”

“People share wisdom and confirm a growing disconnect between how we currently measure success and what engenders happiness,” she said.

To join the 18-mile walk from Santa Monica to Malibu head to gnhusa.org/happiness-walk or meet Paula on Santa Monica Pier at 9.30 a.m Saturday, Oct. 7 beneath the “End of Trail Route 66” sign. She’ll then head north along the walk/bike path and PCH toward Malibu.