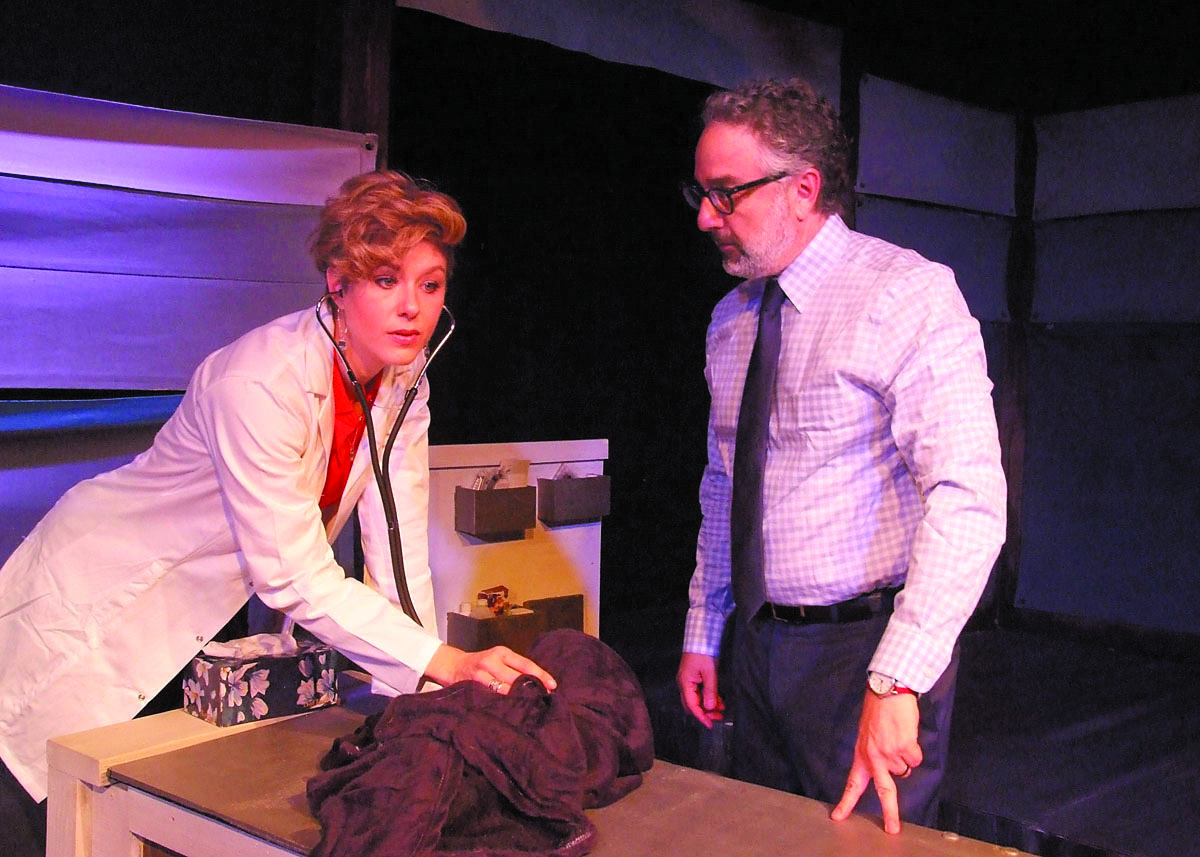 Ok. It’s summer. It’s watermelons and hot dogs – potato chips and corn-on-the cob. This is fun food, temporarily filling, but not long lasting or particularly nourishing. I use food as an analogy in reviewing “Rainbow Bridge,” the current summer production on stage at the Ruskin Group Theatre as it kind of fits into the same category. The play, written by Ron Nelson and directed by Michael Myers, is perfectly enjoyable for what it is, but don’t expect a fulfilling theatrical experience.

The story revolves around Jerry (Paul Schackman) kind of a nebbishy guy who is dealing with the euthanization of his pet dog Charley, played by a stuffed animal. He is with a zany veterinarian named Dr. Stein (Jaimi Paige) who, besides being ready to put Charley out of his misery, wants to have sex with Jerry. Jerry is sad at the prospect of Charley’s death so Dr. Stein gives him a rather poignant poem to read over the puppy’s dead body called “The Rainbow Bridge.”* Jerry reads the poem to Charley and has a brief conversation with him telling him that he was a great dog and will be missed. When Jerry finally tells Stein that he’s happily married to Karen (Emily Jerez) and doesn’t wish to have an affair, she breaks down sobbing and he does everything he can to try to console her.

But wait. A dead dog and a Dr. Stein, who is hot for his body, are the least of Jerry’s troubles for somehow the poem has resurrected his dead, nasty, foul-mouthed mother Lois (Lynne Marie Stewart) and his hostile sister Amanda (Mary Carrig). These two rather unlikeable dead relatives, unseen by anyone else, haunt him throughout the rest of the play. They invade his life tormenting him with accusations of being a failure as both a son and a brother. Mom brags about all her affairs, while Jerry boasts that he’s been faithful to his wife. “That’s because you’re lazy,” she shoots back at him. Having conversations with these dead family members creates confusion for other people in his life, as some of his replies to mom and sis appear to be non-sequiturs or downright hostile and not understood by the “living” people around him. His nasty responses eventually lead to serious marital consequences.

Now, Jerry is an attorney and the action switches to a courtroom where he is defending is client Theodore, (L. Emile Thomas) on an arson charge. We hear the voice of the unseen Judge Strauss (Mouchette Van Helsdingen) who throws out the evidence and dismisses the case. Theodore loves his work and mentions that someone is willing to pay him $10,000 to burn down an Olive Garden restaurant. His attorney strongly advises against such action, but in a subsequent turn of events, actually contracts to use his services as an arsonist.

Constantly attacked by mom and sis throughout the play, in desperation Jerry asks his mother what he has to do to get them to return to from wherever they came from. Based on a long held grudge, mom has one simple request: “Kill Harriet Feldman.” He can take the badgering no more and finally agrees to commit the crime. He makes a plan that would involve that sexy Dr. Klein giving him drugs and Theodore setting fire to the house, thereby eliminating what would be left of the corpse. He pays his partner in crime $600 in quarters for the torch job. So now we meet a rather pathetic Harriet Feldman (Mouchette Van Heldsdingen) who is wheelchair bound, almost comatose, and in the advanced stages of dementia. She thinks Jerry is her husband and the arsonist Theodore, who is about to set fire to her home, is her son. Mom suggests that they steal Harriet’s big diamond ring to which the indignant Jerry replies: “ We are here to kill, not to steal.”

So the silly antics continue with a few surprises along the way. Just like summer food, “Rainbow Bridge” will give you a few delicious laughs but with no lingering pleasurable after taste.

*This is actually a very poignant poem giving comfort to those who lose their beloved pets.