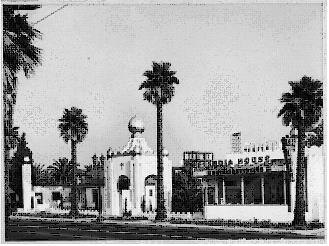 Self-Realization Fellowship’s historic Hollywood Temple, an urban oasis of spiritual fellowship and seeking since 1942, celebrates its 75th anniversary onAugust 30.
Founded by Paramahansa Yogananda – widely regarded as the father of Yoga in the West and author of the celebrated spiritual classic Autobiography of a Yogi – the Hollywood Temple is SRF’s oldest existing temple in America. It continues to play an important role in Paramahansa Yogananda’s mission to spread India’s ancient teachings of Yoga meditation throughout the West and to promote the underlying unity of the world’s religions.
About the establishment of SRF temples, Sri Yogananda stated: “I am not interested in building huge edifices of stone wherein God is absent. We should have many small temples filled with a true spirit of devotion for God and of united seeking of God.”
Paramahansaji conducted Sunday services at the temple until shortly before his passing in 1952, and regularly presented commentaries on passages from the New Testament and the Bhagavad Gita to show the profound parallels between the religions of East and West. Today, the Hollywood Temple of SRF has a vibrant congregation, and is known as a place of pilgrimage and where people of all faith traditions can come together for inspirational and meditation services based on the teachings of Sri Yogananda.
It has been recognized as one of Los Angeles’ hidden gems – a spiritual haven in the heart of the city. Among its prominent features are the temple itself, meditation gardens, a serene gazebo-like mandir (temple) and koi pond in addition to several historic artifacts dating back to Yogananda’s time.
Also situated on the temple property is India Hall, which was dedicated by Yogananda in 1951 for the purpose of fostering  cultural exchange between East and West. India Hall originally included one of the city’s first vegetarian restaurants (serving a popular “Mushroom Burger”), which ceased operation in 1969 after nearly 20 successful years. Today, India Hall hosts numerous special events throughout the year, and also includes a book room where SRF publications can be purchased.
In addition to weekly meditation and inspirational services as well as classes in Hatha yoga and meditation, the Hollywood Temple of SRF also has a Sunday School program for children aged three to nineteen.
The SRF Hollywood Temple is located at 4860 West Sunset Blvd. in Los Angeles, California.  For more information about services and events, please call (323) 661-8006 or visit http://www.hollywoodtemple.org.
By Staff Report August 10, 2017
Tags: 75th, anniversary, hollywood, SRF, Temple in News
Related Posts