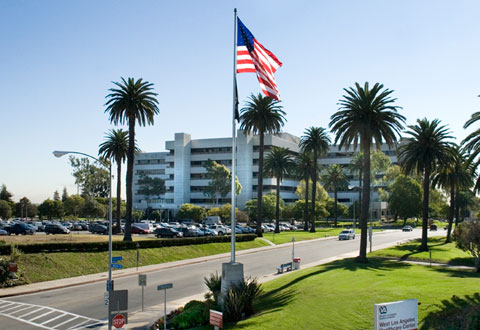 On July 14, the U.S. Department of Veterans Affairs (VA) held a panel at the VA Greater Los Angeles Healthcare System (VAGLAHS) in West L.A., to showcase the current and pending program updates that are to be implemented in the future.
With topics ranging from improving the VA employee experience to enhancing the claims process, (they switched from paper to digital this year), to enhancing the VA’s strategic partnerships, the main topics of discussion fell on how to improve the bureaucratic process for veterans who want to appeal their cases to the VA. Presently appeal cases take on average 124 days nationally and 123 days locally.
The panel consisted of Tom Ruck, the director of the National Cemetery, Ann Brown, the director of the VA Los Angeles Healthcare System, Heidi Marston, the special assistant to the secretary of the VA, and Robert McKenrick, the director of the Los Angeles regional VA office, and the also discussed how to improve usage of the Los Angeles VA’s land.
In the past, there have been complaints regarding land belonging to the VA being occupied by non-VA structures such as Brentwood School’s athletic complex and Jackie Robinson Stadium, of which the future of both are under tentative discussion.
The VA is trying to create more housing for veterans on VA land, while working with the surrounding community, explained Ann Brown, director of the VA Los Angeles Healthcare System.
“Our main goal is to empower veterans, while also creating transparency with them and with the community,” she said.
A key issue discussed at the forum was that of ending Veteran homelessness in West L.A.
The January 2016 point-in-time homeless count saw a 30 percent year-on-year decline in homeless veterans in L.A. county and neighboring communities, according to VAGLAHS, with a 44 percent reduction in unsheltered homeless veterans.
“The VA and the local community have worked collaboratively to quickly rehouse homeless Veterans and build a support system to allow those falling into homelessness to be rapidly rehoused,” explained VAGLAHS Chief of Communications Christine Pons.
Pons told The Mirror that the VA’s intent is to transform the GLA campus into a vibrant community, “where Veterans can receive housing, healthcare, benefits, and other supportive services – with a specific focus on chronically and aging homeless Veterans, female Veterans with dependents and other underserved Veteran populations.”
For more information on the Los Angeles area VA, visit losangeles.va.gov