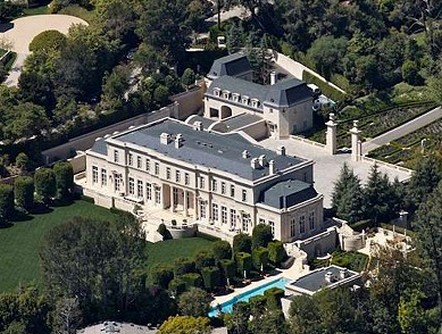 April Fools Day has yet to arrive, so the news of the Fleur de Lys estate in the Holmby Hills area selling earlier today for record $102 million just a few hours before April 1st is quite real. Indeed, the sale price of the 12-bedroom, 15-bath mansion is the highest-ever for a home within Los Angeles County.

According to Multiple Listing Service (MLS), the original asking price was $125 million.

Reportedly on and off the market since 2007, Suzanne Saperstein, who had lived at the residence since she and her now ex-husband built it in 2002, sold the 35,000 square foot house March 31, according to MLS and various news reports.

Located at 350 North Carolwood Drive in Holmby Hills, the Fleur de Lys estate ranked second on the Forbes Top 10 list of most expensive homes for sale.

Forbes stated Saperstein placed the estate for sale in 2007 but did not budge from the $125 million asking price for years.

It is unknown why the final selling price was $23 million below what Saperstein originally sought, especially in light of some media reports stating three bidders entered into a bidding war to purchase the estate.

Colloquially labeled as the “most beautiful estate in America” according to Forbes, the Fleur de Lys estate sits on more than four acres and includes a guesthouse, 50-seat theater, ballroom, gym, dual kitchens, and pool house, among other amenities.

The Forbes list described the Fleur de Lys estate as “a European-style palace fit for royalty with marble walls and limestone floors and plenty of gold embossing everywhere.”

Jackson Ranch in Jackson, Wyo., was listed ahead of Fleur de Lys estate as the most expensive house for sale; Forbes reported the asking price to be $175 million.

While the Fleur de Lys estate sale is the most expensive on record in Los Angeles County, a nine-acre mansion in the San Francisco Bay Area city of Woodside reportedly sold for $117.5 million in 2013.

Holmby Hills is nestled in between Bel Air, Beverly Hills, and Westwood.

Describing the Fleur de Lys as “one of the finest estates in North America,” MLS reports Fred Bernstein represented the buyer; Kurt Rappaport listed the home on behalf of the seller.