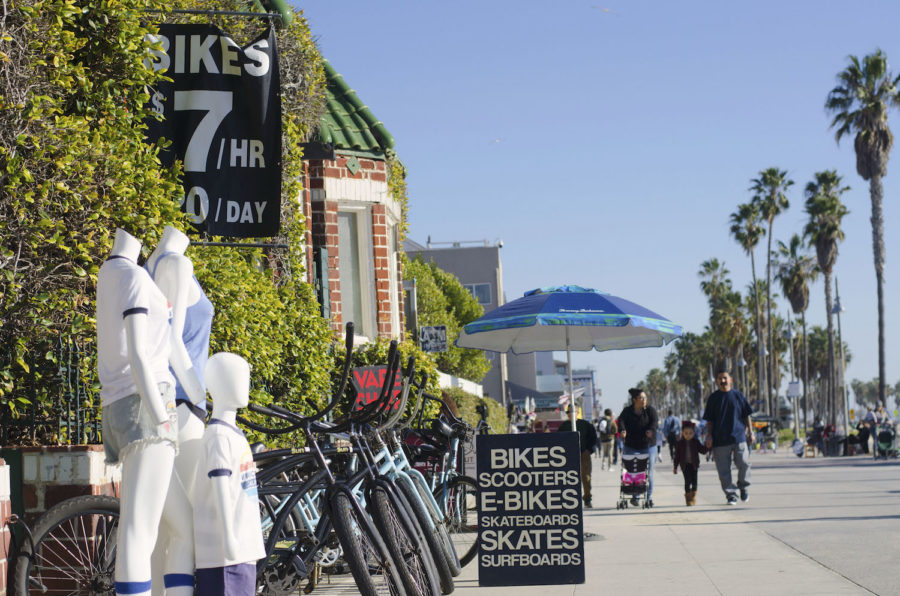 Nearly two years after Bird and Lime debuted their electric scooters on the streets and sidewalks of Santa Monica and San Francisco, their popularity has grown exponentially. While e-scooters provide a convenient and easily accessible mode of transportation for consumers, bike rental owners in Venice, Santa Monica and the Westside are aware of the growing industry’s negative impact to both their business and customer safety.

Javier Cernas opened Jay’s Rentals twenty years ago on Venice Beach. Located at 1501 Ocean Front Walk, Jay’s Rentals offers rentals for bikes, rollerblades, skateboards, surfboards and scooters. Since the rise of the e-scooter and subsequent surge in its popularity, Cernas has had to cope with a sharp decline in his business.

“They’ve definitely had a big impact on our business, the bike rental business,” Cernas said. “Last summer we saw a significant 40 percent drop on our rental business. The summer before that, we would run out of bikes on the weekends.”

Cernas’ biggest issue with e-scooters is where they are placed when not in use, especially when riders drop off Birds, Limes and Jump Bikes, among other e-transit devices, in front of his shop.

“I can tell you personally what we have to deal with every day at the shop. People park the scooters in front of our shop. Between all the different companies that are out there right now, we have to move their scooters out of the way,” he said. “Some people, rather than rent something from us, rent the scooters. We lost a lot of business because of it. With the other scooters, people have the advantage to drop them off anywhere they want.”

Efforts to address the issue have been unsuccessful, and this is frustrating to Cernas, who has to deal with these rental devices on a daily basis on top of running his own rental business.

“It’s disrespectful. We are an established business, and they literally put their scooters right in front of our door. We have several situations in which we approach the people who are dropping off the scooters. We’ve said, ‘Hey, can you put them somewhere else.’ And they say they’re just getting paid to do this. They completely ignore us. They tell us that if we want them to move it, call the company. If they’re told by the company to move them, they’ll do so. It’s an everyday battle.”

Yo! Venice reached out to Lime regarding the placement of their scooters in front of Jay’s Rentals and other rental stores throughout the Westside.

“Deployment of scooters and bikes is based on optimizing ridership and we change locations daily. We have never purposely targeted any type of business and all our deployments are within the confines of the city’s parking rules and guidelines. Lime prides itself in being a community partner and we will look into this concern,” Lime said in a statement.

Just north of Venice in Santa Monica, where stricter scooter regulations exist, Rob Wakefield, owner of Santa Monica Bike Rentals, located on 1428 4th Street, says his business has been more impacted by weather than by the rise in e-scooter use.

However, his biggest issue with e-scooters is the threat they pose to public safety.

“If a person on that scooter hits a pole, they’ve got brain damage. And those scooters with little wheels can very easily flip over. People don’t realize the potential injuries that can occur on those scooters. It’s the most dangerous transportation on the road,” Wakefield said.

“I rent them, but I let the person know unless they can drive them carefully, they’re very dangerous,” Wakefield said. “I know a nurse in the ER at UCLA, Santa Monica and people go there every single day with injuries from using those scooters. I see children with no helmet riding a scooter. It’s unbelievable. If that person gets in an accident, they potentially have a problem for the rest of their life.”

A recent UCLA study shed light on the severity of e-scooter accidents. According to the researchers, people involved in e-scooter accidents are often injured seriously enough — from fractures, dislocated joints and head trauma — to require treatment in emergency rooms.

The researchers examined data from 249 people who were treated at the emergency departments of UCLA Medical Center, Santa Monica, and Ronald Reagan UCLA Medical Center between Sept. 1, 2017, and Aug. 31, 2018. The study found that about one-third of them arrived by ambulance, an indication of the severity of their injuries.