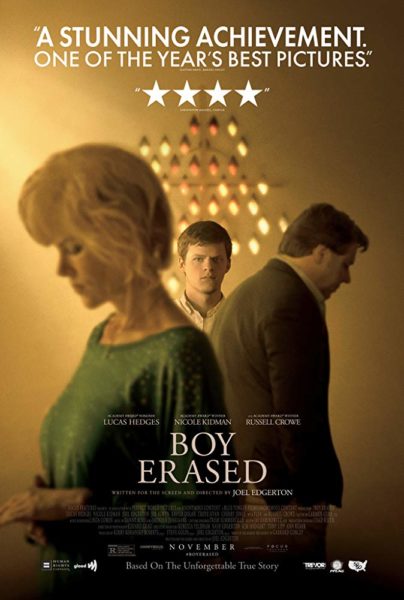 “Boy Erased,” a deeply affecting and heartbreaking movie about gay conversion therapy, stars Lucas Hedges as Jared, Nicole Kidman as his mom Nancy, and Russell Crowe as his dad Marshall. When Jared’s devoutly Christian parents conclude their son is attracted to men, they enroll him in a gay conversion therapy program called Love in Action to try to change him.

When the attendees get to the center, they are required to hand over all of their possessions. Some are allowed to leave the facility at the end of the day at five, while others actually live on-site. Those who live on site have it worse, as the center is especially harsh on them, draining them of any semblance of personality, as evidenced by a lesbian girl Jared befriended.

The man who runs Love in Action, Victor Sykes, played by Joel Edgerton (who also directed the film), believes that no one is born homosexual; rather, it is a quality that one develops over time. He singles out one of the attendees named Cameron who plays football and says that Cameron was not born playing football, but was something he grew to enjoy. Sykes, who is brash and outspoken, is uncompromising in his dialectic and even goes so far as to pass himself off as a doctor despite lacking all credentials. Edgerton is very convincing in a role that is not simply reduced to a one-dimensional portrait. The character honestly believes that he is doing good.

The movie effectively shows the extremes gay conversion therapy will go to try to purge vulnerable people of their homosexual urges and what it does to their psyches. By trying to rip apart an identity that people feel is intrinsic to them, these centers in effect cause major self-doubt and self-esteem problems. An aspect that the film explores is the harmful effects of labeling theory and how by simply being attracted to someone of the same sex, one can be labeled as different or an outsider, especially in conservative Bible belt areas, where the film takes place.

The film charts Jared’s growth and the realizations he experiences through his self-acceptance. A particularly memorable, poignant encounter takes place when Jared meets a young gay man named Xavier at an art exhibit. The two go back to Xavier’s apartment and simply talk about their different philosophies and Jared ends up spending the night without any sex involved. What was surprising to Jared was that Xavier turned out to be loving, cultured, and very open-minded.

The two real-life singers in the movie – Troye Sivan and Flea – both unquestionably prove that they can act. Sivan, who plays one of the Love in Action attendees named Gary, and is actually openly gay, gives a quietly introspective performance of subtlety. Gary outwardly tries to just play the part of the submissive attendee who wants to complete the program, but knows deep down that is not how he can live. The musician Flea (in a menacing, intense performance), meanwhile, plays Brandon, who is introduced to the group as a way to motive them. Brandon says like them he was once afflicted by destructive, sinful tendencies (but not homosexuality) that brought him down, but was ultimately saved by God, implying that if they seek out the Lord, they can rid themselves of their same-sex desires.

Kidman and Crowe both give sympathetic performances as the parents trying to understand their son in this difficult time. His father is representative of those individuals in denial because they love their family but their deeply set views of masculinity cannot overcome the biblical teachings they see of manhood and righteousness, and to them, deviant sin in the form of homosexuality. The mother shows what can and should be done with a parent overcoming society to protect and love her child.

Hedges’ vivid performance, though, is ultimately what sticks with you the most. His aching, raw hurt and his longing for acceptance is palpable. He is able to fill the character with nuances that show the struggle he is continually dealing with.

The film is able to shed light on an issue that is not that widely known. While not an easy watch, the sociological and psychological insights imparted provide much room for thought and reflection, resulting in a film that leaves a powerful impact with some hope in the end.