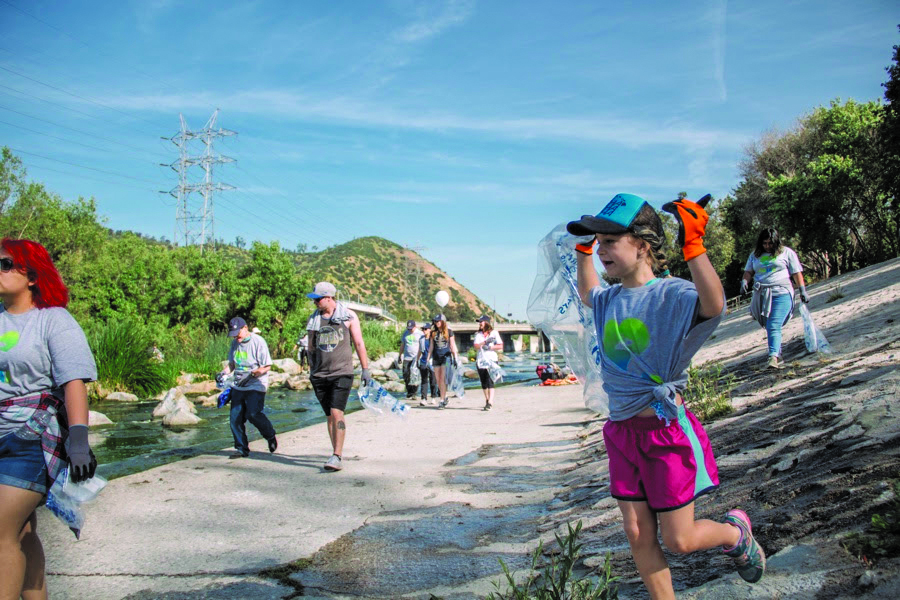 Friends of the LA River (FOLAR) has broken its own record from last year in both number of volunteers and tonnage of trash collected for the just-completed 28th Annual Great LA River CleanUp: La Gran Limpieza (CleanUp).

The annual CleanUp has exploded in recent years, and is the largest urban river cleanup in America. Held the last three Saturdays of April, the 2017 CleanUp attracted 10,000 volunteers who collectively removed over 100 tons of trash from 14 sites along the length of the LA River.

Focusing primarily on the soft-bottomed and green sections of the LA River which are, in themselves, incredibly diverse, the sites ranged from the bucolic Sepulveda Basin in the San Fernando Valley, to the Golden Shore Marine Reserve in Long Beach, where dolphins and seals are a common sight.

After the rains this year, there was an increased need for the CleanUp as additional trash was caught in the green sections of the River. Regularly found trash includes numerous shopping carts, plastic bags (fewer every year), snack wrappers, cups, and mattresses. Volunteers also found more exotic items ranging from car parts to bathtubs to a 6-foot giant Styrofoam head.

Volunteers included visitors from across California, but primarily Angelenos of all ages and backgrounds, including families, students, elected officials, and hipsters – many of whom participate each year. More than 200 volunteer groups turned out, along with the thousands of individuals, demonstrates the ubiquitous interest in and passion for the LA River.

“The CleanUp is an inspiring demonstration of the power of community and shows how far the LA River Movement has come,” said Marissa Christiansen, FOLAR’s Executive Director. “Angelenos are a powerful people and when 10,000 of us come together there is nothing we can’t accomplish.”

FOLAR’s Founder, Lewis MacAdams, said that he knew Angelenos would love their river again and become its stewards, with the effects of such stewardship reaching Great Los Angeles.

“Each area of the Los Angeles River is unique and requires special attention and appreciation,” MacAdams said.

FOLAR’s stewardship of the river encourages community engagement, education and enjoying time at the river. To that end, volunteers were entertained during the events by popular local bands that came to the CleanUp to connect with the LA River community.

For more about the clean-up efforts head to: folar.org