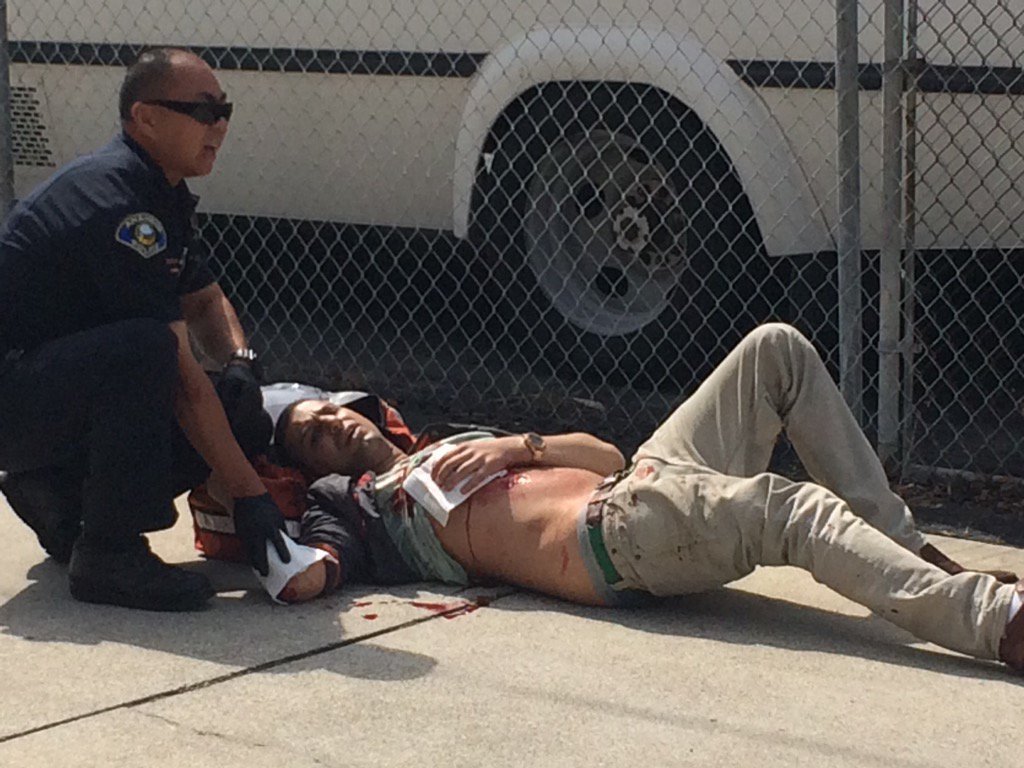 Three counter-protesters were stabbed Saturday while clashing with Ku Klux Klan members staging a rally at a park in Anaheim, where 12 people were arrested.

One of the counter-protesters was rushed to a hospital in critical condition as a result of the violence that broke out about 12:10 p.m. at Pearson Park, 400 N. Harbor Blvd., according to Anaheim police Sgt. Daron Wyatt. His condition has since been upgraded to stable, the sergeant said.

Six KKK members arrived on the south side of the park to start their planned walking protest and were immediately attacked and stomped by counter-protesters, who numbered about 30, Wyatt said.

The melee spanned a block-long area, he said.

A second stabbed counter-protester was in stable condition when taken to a hospital and a third, who was found in a vehicle at the intersection of Lemon and Sycamore streets, was also hospitalized in stable condition, Wyatt said.

All three are males believed to be adults, he said.

The critically injured victim was stabbed with an eagle ornament at the end of a pole holding a Confederate flag, the sergeant said.

One of the two of the stomped Klansmen was taken from the scene for hospital treatment and the other sustained minor injuries and refused treatment, Wyatt said.

All but a male juvenile who was among the counter-protesters were adults, he said.

Four of those arrested, including the juvenile, were released after further investigation, including a review of video evidence,” Wyatt said.

The rest were booked on suspicion of a variety of offenses, including assault with a deadly weapon, assault with force likely to cause great bodily injury and elder abuse, he said.

The counter-protesters were clearly the aggressors who initiated the violence, he said.

Police officers stationed at the park because of the publicized rally reacted immediately and called for back-up as the violence erupted, Wyatt said.

Investigators believe there are numerous cell phone videos of the violent clash and asked anyone with such images to call Orange County Crime Stoppers at (855) TIP-OCCS.

“Even if the vast majority of our community disagrees with a particular group who visits our city we cannot stop them from lawfully gathering to express their opinions,” Anaheim Police Chief Raul Quezada said.

“Violence is not acceptable, and we will arrest anybody who assaults another person or commits any other crime in our city.”

Investigators were reviewing evidence, including video, and interviewing witnesses and will forward their findings to the district attorney’s office, Quezada said.

“We will keep the community informed as details warrant,” he said. “I implore everyone to maintain peace and order in the aftermath of this incident.

One suspect, a man, was outstanding and being sought, Wyatt said.

The arrested suspects were identified as:

–Charles Edward Donner, 51, of San Francisco, who was booked on suspicion of assault with a deadly weapon, with bail set at $25,000;

–Marquis DeShawn Turner, 20, of Anaheim, who was booked on suspicion of assault with a deadly weapon, with bail set at $25,000;

–Randy Omarcc Felder, 25, of Lakewood, who was booked on suspicion of assault with a deadly weapon, with bail set at $25,000;

–Guy Harris, 19, a transient who was booked on suspicion of assault with a deadly weapon, with bail set at $25,000; and