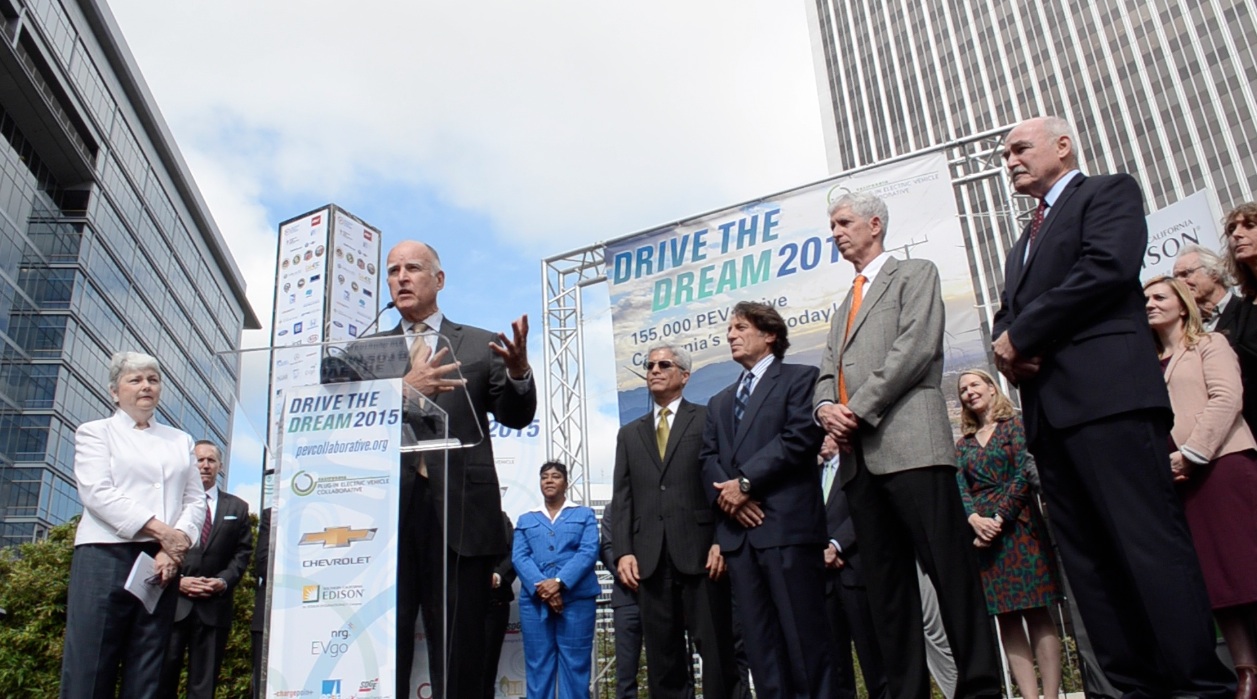 A sunny and windy morning was the perfect climate to praise renewable energy in Century City and the rest of California during the second annual Drive the Dream 2015 with the California Plug-In Electric Vehicle (PEV) Collaborative, Gov. Jerry Brown, and a diverse group of more than 40 California corporate leaders, public sector partners, and industry leaders.

They all met at Century Park to announce new commitments and initiatives aimed at accelerating the continued adoption of plug-in electric vehicles and workplace charging in California.

“This is really good because it’s business, it’s government, it’s people – that’s what California is all about,” Brown said, “with only 1 percent of the emissions that are harming the planet, we have 15 percent of the plug-in vehicles and we’re going to do a lot better and keep on going. But we want to spread it around. What we have here in California is something really important – it’s the benign combination of entrepreneurial innovation and smart regulation. The regulation in many cases drives the innovation.”

Under Gov. Brown’s leadership, California has set the most aggressive clean transportation goals in the country, including creating a charging network to handle 1 million electric vehicles by 2020.  Businesses and public sector partners have been busy coming up with programs and policies to promote workplace charging, fleet vehicles, and provide incentives to employees for the purchase of PEVs.

“And we’re looking at all these vehicles that are the product in many respects of California’s leadership,” Brown said of the 12 new cars on display at Drive the Dream 2015, including the Chevrolet Volt, Tesla Model S, Kia Soul EV, Mercedes Benz B-Class Electric Drive, Nissan LEAF, BMW i3, Ford C-Max Energi, Honda Fit EV and Toyota Mirai. Also on display were the latest plug-in technologies from NRG and ChargePoint, an EV fleet vehicle from PG&E and electric bikes by Motiv Electric Bikes, among other sponsor exhibits.

The star of the cars, however, was an orange Chevrolet Bolt EV concept car, which will go on sale in California in 2018.

Significant new investments by companies and public sector partners that were announced at the event included the expansion of vehicle charging stations, purchase of PEVs in fleets, and employee incentive programs to help increase investment in California, add jobs, improve air quality and reduce reliance on oil.

“So we have a big task out there, and let us never forget that we are importing 70 percent of oil,” Brown continued. “A lot of it is coming from very unstable and dangerous places. People in Los Angeles, remember: just a few months ago, your gasoline prices spiked. The sun doesn’t blow hot and cold. It continues to shine and as it does, it charges up our solar collectors, the wind blows, it charges up our electric stations, and that’s the combination. We’re making it California-centric.

“So this is a California first. We’re going to hire local people to deal with all these issues of charges and repairing the automobile, parking, and the buildings, and all the rest of it, including renewable energy because to have an electric car, it’s crucial that the electricity is coming from the wind and solar and other renewable sources. So this is a very happy day, a very creative combination of government, of business, of intellectual research, and entrepreneurs willing to risk their money.”

Among the announced investments and commitments was the Department of the Navy, which announced plans to lease of more than 450 electric vehicles to replace gas-powered vehicles at Navy and Marine Corps bases across California. Honda announced it is adding 120 new electric vehicle chargers on its Torrance, Calif., headquarters campus.

NBCUniversal announced it has invested in 64 charging spaces across its property in support of employees and guests who drive electric vehicles. And Vision Fleet announced a goal to work with corporate, government, and other innovative fleets in California to deploy 2,000 PEVs in the state by the end of 2016.

From public energy and water, PG&E announced it will invest $35 million for new chargers, workplace incentives, and expand its corporate PEV fleet. And Los Angeles Department of Water and Power (LADWP) announced it will purchase and lease 157 plug-in vehicles (117 Volts and 40 LEAFs) and EV chargers to support the vehicles. LADWP will also make many of these fleet chargers available to its employees as workplace chargers, and they plan to install 104 public chargers on city property, an investment of $5.5 million. Finally, Southern California Edison announced that over the next 12 months it is installing an additional 50 level 1 and 2 fleet charging stations to supplement existing 340 charging stations that support its current fleet vehicles and future fleet acquisitions, and it will acquire an additional 36 Plug-in EV (PEV) fleet vehicles, an approximate $4.5 million investment. It is also installing an additional 25 level 1 and 2 workplace charging stations at Edison facilities.

“This is a place of innovation. It’s not the ordinary way, but it’s the way of the future,” Brown concluded.

For more information about Drive The Dream 2015 visit pevcollaborative.org/drivethedream.