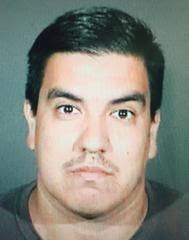 On Saturday, July 25, 2015, at 4:30 pm, a concerned area resident called the Los Angeles County Sheriff’s Malibu/Lost Hills Station describing suspicious activity. The caller said that he was watching a man who was attempting to open different cars parked along Pacific Coast Highway and Mulholland Highway, near Leo Carrillo State Beach in the unincorporated Los Angeles County area. From a distance, the witness provided the description of the man and a Silver, 2002 Chevrolet Trailblazer belonging to the suspect. Deputy Sheriff’s assigned to the Malibu area, assisted by members of the Sheriff’s Summer Beach Team, quickly responded to the area and located the suspect.

The Deputies discovered that the suspect, identified as 33-year old Israel Padilla of Oxnard, had over 100 cellphones, laptops, tablets, car keys, and other items that appear to have come from dozens of recent car burglaries. Some of the property has already been identified and returned to a victim of a vehicle burglary from earlier in the same day. Additionally, Padilla was found to be in possession of several tools and gloves, commonly used in the commission of burglaries. The suspect is an active Parolee for Burglary, having been released from State Prison in April. He is also a Registered Sex Offender from a 2004 arrest in Ventura County. He is currently facing numerous felony charges stemming from this burglary incident, as well as a Parole Violation hold.

This incident is a strong reminder that there are criminals out in our communities who are looking for valuables left in vehicles. Remember to take your property from vehicles and lock doors – avoid being a victim of a property crime.

The Los Angeles County Sheriff’s Department is diligent in its efforts to arrest offenders who prey upon the residents and visitors of our county. With the great assistance of the public who report suspicious activity, law enforcement has the ability to take the criminals off the street – if you see something, say something! If you wish to remain Anonymous, call “LA Crime Stoppers” by dialing 800-222-TIPS (8477), texting the letters TIPLA plus your tip to CRIMES (274637), or using the website http://lacrimestoppers.org

The Malibu/Lost Hills Sheriff’s Station is seeking any additional witnesses that may have seen the suspect in the area or has information relating to this suspect to call Detective Solomon at (818) 878-1808, reference File #15-04362.