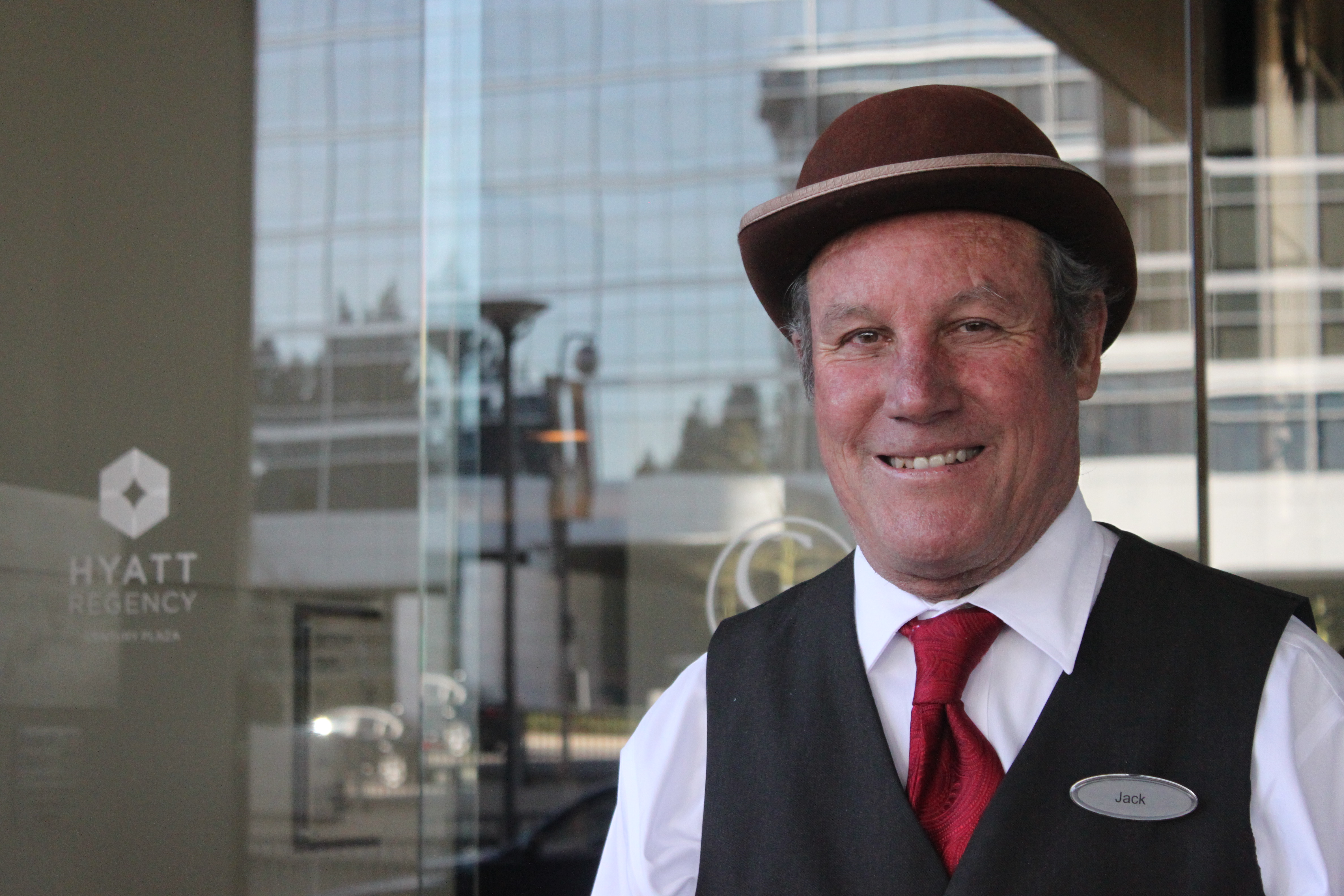 As doorman at the famed Century Plaza Hotel for 45 years, Jack Milos has seen it all.

From celebrities he’s befriended to protests his guests have stirred, Milos has acted as witness to the glory days of Century City’s hotel industry.

When the Century Plaza Hotel closes in March for a two year, $2.5 billion renovation, it will take with it decades of dedicated employees who have seen the rise and fall of the 19-story curved hotel.

Milos is a wellspring of classic Los Angeles anecdotes.

“Back then, wow, it was a happening place,” the 68-year-old said. “This was the spot back then. Even though I missed the opening by four years, I can remember I never saw the bottom of the driveway; it was busy the whole time.”

Since opening in 1966, the Century Plaza has hosted a range of politicians, foreign dignitaries, and celebrities over the years, as well as every United States President.

It was also the residence of choice for President Ronald Reagan, who stayed at the hotel so often that the press named it the “Western White House.”

“The craziest thing that probably ever happened to me here was when President Reagan was in his second term – we had the Tower section then,” Milos said of the luxury wing adjacent to Olympic Boulevard constructed in 1984.

The gay community had marched from West Hollywood to protest the President’s inaction against the then-burgeoning problem of HIV/AIDS. Milos, running around in his beefeater uniform, had never seen anything like it.

“We all had to vacate from this building to the Tower for safety,” he recalled. “And then they tore the plants out, the broke the ashtrays; they were mad.”

Other superstar sightings were less dramatic but nonetheless awesome, like witnessing Muhammad Ali and his entourage during the boxer’s heyday.

Most moments with his celebrity guests were like greeting old friends. Like all of the times Jimmy Stewart would ask Milos to hold his blue Volvo in the driveway – not the garage – and Milos would reply, “Mr. Stewart, you don’t have to ask anymore. Just waive and I’ll take care of you.” Or when Danny DeVito asked Milos to star in “Throw Mama From The Train,” and hold the door for Sigourney Weaver. Or that one time Milos had to inform a white-veiled bride who the familiar-looking man was that just wished her a lifetime of health and happiness. It was Tom Hanks, of course.

“The other day Jon Voight was walking around to the MGM building with his buddies and of course he sees me and he has to leave his buddies just to come over to say hello to me,” Milos said. “That was so nice of him because I’ve taken good care of him so many times.”

He takes care of his guests, and in turn, they take care of him.

Most of Milos’s recollections were periodically interrupted by “hellos” to his regulars, hotel frequenters he’s known on a first-name basis for decades.

“This is like their second home, and they know all of us, we know them,” he said. “And the odds are, we’re never going to see each other again.”

Milos is taking the severance package when the hotel closes, but he said he’s still too young to retire. He doesn’t know where he’ll end up, but he’s hoping for something part-time and easygoing, something to get him out of the house.

It’s a bittersweet time for Milos, and he said for most of the hotel’s patrons, they remain upset.

“I hate what they’re doing here,” one of Milos’ regulars yelled during the interview.

Milos said for them, it’s not about the building but about the people who work there.

“They’ve been coming here for years and a lot of them have given me their business cards because they want to know where I’m going to end up,” he said.

Milos was born in downtown Los Angeles in 1947 at California Hospital. Raised around the area, he joined the seminary and went to St. Mary’s College in Moraga, California, and ended up at Creighton University in Omaha, Nebraska, graduating with a degree in philosophy and a minor in economics.

In 1970 he came back to Los Angeles, and his brother-in-law’s brother, who worked at the Century Plaza, got him a job at as a valet.

“And then a year came by and I decided I wasn’t going to pursue the priesthood, and then I couldn’t decide what I wanted to do with myself,” he said. He tried out as an insurance salesman, but that wasn’t right for him. He was good with his hands, so worked as an auto mechanic, but he didn’t like that, either.

When the doorman position opened up at the hotel, he said he fell under the perfect job for his personality. Where he once wanted to help people spiritually, he found a more tangible approach.

“The doorman is the first and last person that meets the guests,” he said. “So his impression is really tantamount. Even though my mother was upset that I didn’t pursue a job using my degree, I feel that I have an important job. My philosophy is to be the best at what you’re going to be. Whatever you decide you want to do, you want to be the best at it.”

Today, Milos lives in Northridge with his wife of 42 years. They have four children and grandchildren. He subscribes to the Golden Rule and phrases like “love thy neighbor as thyself.”

“I’ve always liked people, and I love to take care of people and be nice to them,” he said.

When the new 1.5 million square foot Century Plaza Hotel opens in 2018, the Century City hotel will have two towers behind the crescent-shaped hotel with 290 luxury residences.

Hyatt will no longer manage the hotel after it closes in March, but an agreement with the hotel union will allow members to apply for their jobs after the hotel’s reopening. The hotel currently employs about 500 workers.

Designed by Minoru Yamasaki, the Century Plaza will be restored with 394 guest rooms and suites and 63 residences and boast an open air lobby transformed by design firm Yabu Pushelberg connecting public plazas and fountains to a central two-acre garden surrounded by restaurants and retail.

When it’s finished, Milos plans on trekking back to his old haunt to check things out.