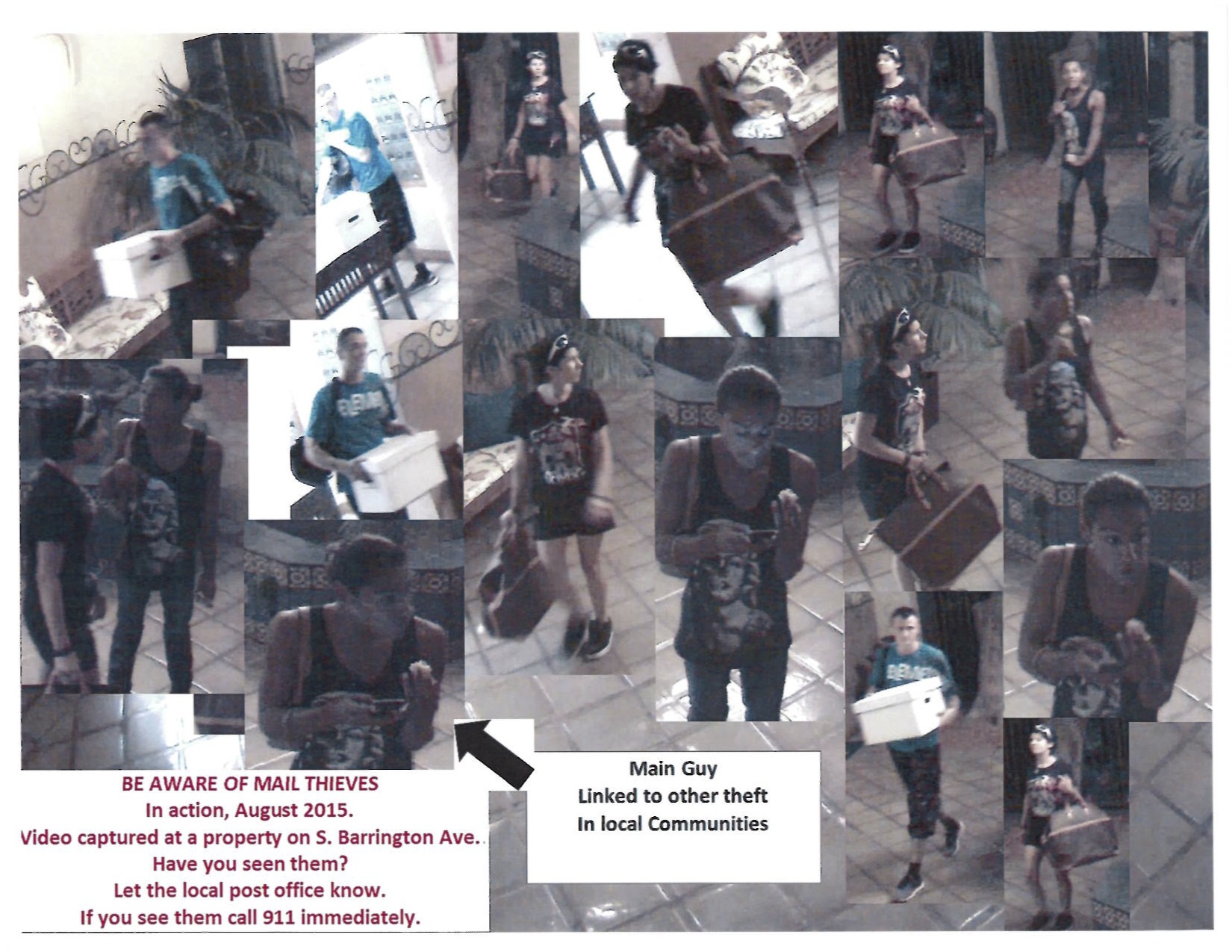 Senior Lead Officer Maria Gray of the LAPD West Los Angeles Division had good news and bad news for her first crime report of the year.

“My battle cry is about beefing up your security systems,” Gray told the Brentwood Community Council Jan. 5. “Crime is up citywide, and this is not untypical, so I don’t want you to feel like Brentwood is under siege.”

But it’s still worrisome that the burglaries are increasing in most areas of West L.A. and are highest in Brentwood, Gray said.

Gray underscored the fortunate difference between property crimes and violent crimes, which Brentwood doesn’t experience as often, and the reports made no distinction between residential and commercial premises.

“These numbers that I’m telling you are also a reflection of the construction site burglaries, residential burglaries, even that guy that just got arrested for the mail theft – he gets arrested for burglary because he went into an inhabited dwelling to commit a felony. It’s a totality of everything; it’s not just residential. Construction site burglaries have played a considerable marked increase in the overall numbers.”

A hot topic among Brentwood residents is the necessity of street lighting. Gray conceded that any light is a possible crime deterrent.

“Burglaries are primarily daytime incidences, but street lighting certainly helps a lot of the car break-ins. We’re finding with the car break-ins, it doesn’t matter if the car is parked in the drive way, the street, or even a secured subterranean garage, it’s still happening,” she said.

“Don’t rely on the locks to keep your bike secure,” she wrote in an email to the community. “They are routinely cut and bikes are easy pickins’ here on the Westside, particularly in the multi-unit complexes subterranean parking garages and lots. If you value your bike, keep it inside your condo or apartment. Also, just because your balcony is on the 2nd or 3rd floor, don’t expect that they can’t get up there to steal your bike. We’ve seen it time and time again. For single-family residences, keep your bikes locked even within your own garages. Burglars who may have already stolen items from inside your home often times jump on bicycles stolen from the garages to make their getaways. So continue to always lock your bikes, just don’t rely only on that to keep your bike secure.”

Another highlight of Gray’s report were the two arrests made last month.

Read her summary of crimes below:

“There are a couple of noteworthy arrests that are worth mentioning. The folks of Westridge and Mandeville Canyon received a nice holiday present early on Christmas morning in the form of two arrests of burglary suspects – due to the quick actions of Westridge residents, who called in to the police and to the Palisades Patrol, an early morning car crash that had occurred on the 2100 block of Westridge. Palisades Patrol Security responded to the service call and checked the area for what was described as two males in dark hoodies involved in the crash. They observed the two suspects approximately 100 yards from the crash site. It appeared that they were leaving the scene. Palisades Patrol detained them and called for the police.

When LAPD officers arrived, they conducted an investigation and discovered the suspects had tools consistent with the commission of burglaries and that there was considerable property in their crashed rental vehicle that was possibly stolen. Both suspects have extensive criminal histories.

This was a great cooperative effort by the community, Palisades Patrol and the LAPD police/detectives, all working together toward the substantial arrest of two suspects with long criminal histories. Great job.

Another arrest, and one that is being processed as I type, is the arrest of a man [Dec. 30] who was allegedly stealing mail/packages from doors and lobbies in the Brentwood area. He turned out to be on Federal probation for mail theft and had a history of committing identity theft and fraud. In his possession were ‘master type’ keys that were able to access multi-unit complexes and their postal boxes. He is also believed to have a methamphetamine habit. He will be ultimately booked by the Feds and faces some serious time. It is a great arrest by our hard working officers. Having mentioned this arrest, it’s a good time to remind folks that although you report incidents of mail theft/fraud after the fact to the Federal Postal Inspector, please call 911 immediately if there is any crime in progress, including mail theft, and hopefully we’ll be able to put more of these bad guys (and gals) in jail.”