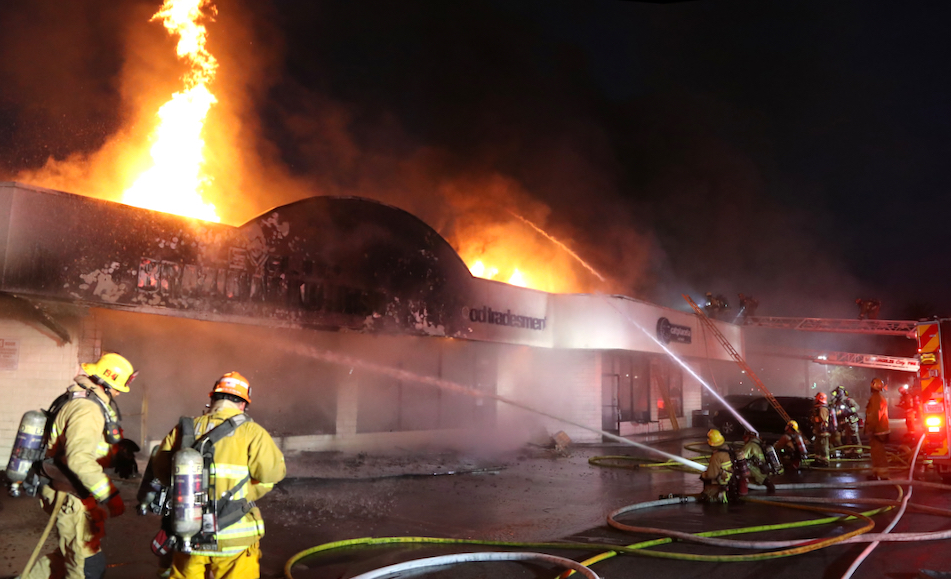 A local Palms strip mall was the site of a recent fire last month which has thrown the lives of the restaurateurs whose places of business were in the building into chaos as reported by the Los Angeles Times.

The fire started at 6:00 a.m. on September 17, and over 120 firefighters were part of the fight to extinguish the blaze. A nearby cat boarding facility was also engulfed in flames that killed 17 cats in the building and an additional two cats were revived after being rescued. Other businesses that were damaged were a martial arts studio, a nail salon, a smoke shop and a staffing agency.

Jay Betts, the owner of Bernie’s Soul Kitchen said, as quoted by The Los Angeles Times, “I was making almost $3,000 a day. Now I’m making only maybe $600.” According to the Times, Betts now uses a ghost kitchen in the Hawthorne area to keep his business going since the building is still burned out and in need of repair. Betts managed to salvage some of his equipment and is also doing catering work and pop ups to try to make ends meet. Even so, someone tried to break into the burned out restaurant but Betts had already moved anything he could. As quotes by The Los Angeles Times, Betts said, “But all they found was an empty cash register.”

Danny Cheng, chef and founder of Golden China Restaurant from the same complex and his press representative said that it might take a year before the restaurant can reopen. Golden China did not respond to attempts to contact them.

Jerk Spot Restaurant avoided damage for the second time after eight years of tenancy. owner Courtney Williams said, as quoted by the Los Angeles Times, “So getting the call this time set off alarm bells. Luckily for us again, we didn’t get damage. It was a relief to see we were not on fire, but it was disheartening to see what was happening after. With some of the shop owners, we had a good relationship, so of course them being affected that way hurts us.”

Tom’s #5 and US Donuts also took no damage and remain open.

Betts said, as quoted by The Los Angeles Times, “It’s not just money — money is the least. The food is what’s most important to me.