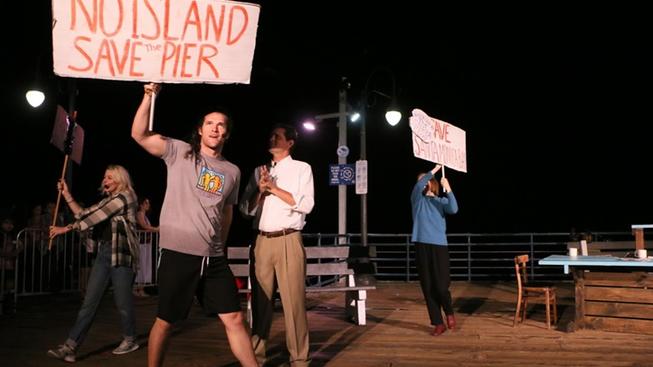 Pass any building, park, interesting destination, or storied space, and you can bet, as sure as you have your own back story, that the structure or place you’re observing does, too.

What happens less often, though, as in far, far, far, way less often, is when a place gets to the opportunity to reveal something about its history, in play form, in the very location where the dramatic events went down.

Call it “meta” if you like — that works — and call it a winning way to further draw back the curtains on the familiar around-town spots we think we know, through and through.

Do you know, though, the story of how Santa Monica Pier became perilously close to total erasure, as in full demolition, in the early 1970s?

A troupe of players will take on that very topic from Friday, April 20 through Sunday, April 22 at the west end of the pier.

“Save the Pier!” is a one-hour play looking back at the time when the pier was nearly no longer, and a man-made island, complete with a massive hotel, was almost put in its place. People rallied to the landmark’s side in the battle, and this dramatic and vocal course of action is what the new work will spotlight.

It’s free to see. Start time is 8 o’clock each night.

James Harris, Deputy Director for Santa Monica Pier, is the playwright and Tony Award-winning actor Paul Sands is at the directing helm.

Call it a creative way to bring local history to the fore, for free, all to celebrate a place that’s become well-loved, and worth fighting for, for countless Southern Californians.

But will visitors to the pier on those three nights, visitors who don’t know a play about the pier in the ’70s is going on, think they’ve passed through some time portal? As people in period clothing talk about Santa Monica Pier?

Staging a play in the place where the story of the play once happened in real life is about as awesome and illuminating as site-specific performances come.

If only every building and location in our region had a band of players to give it a voice.