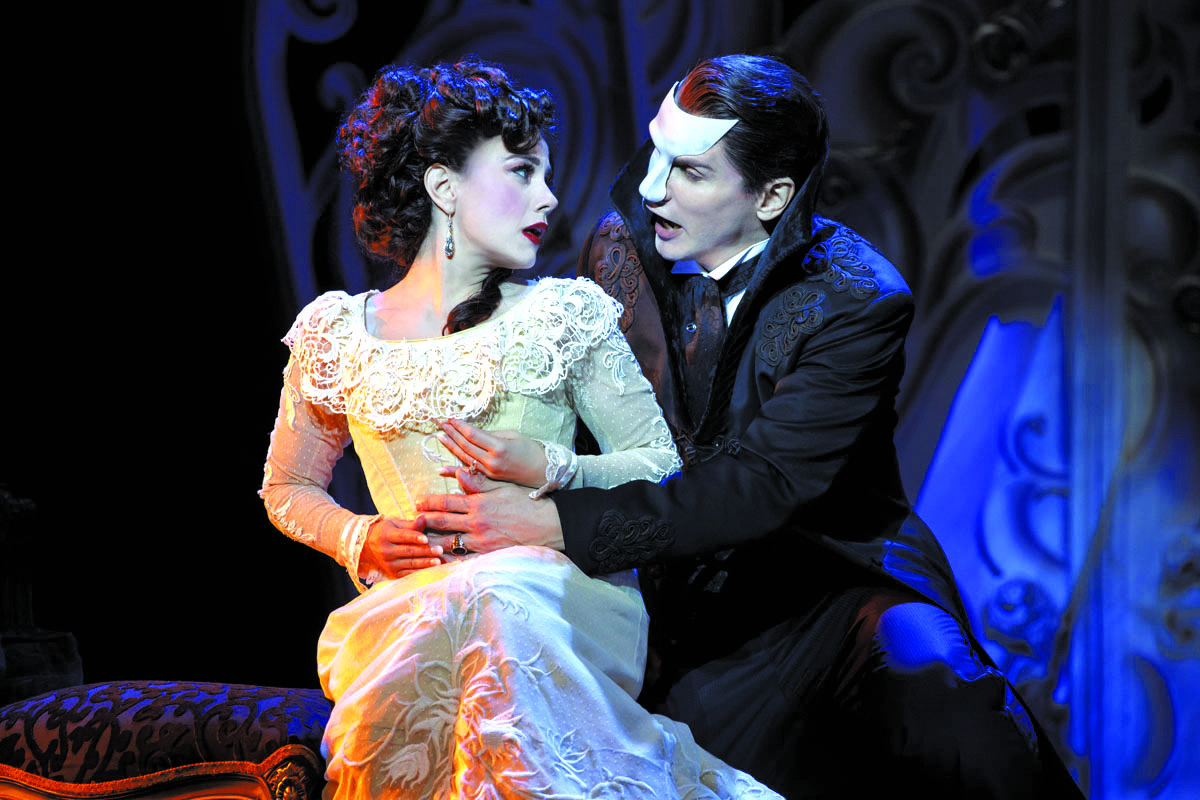 ‘Some loves don’t die easily – especially the compulsive love of the disfigured Phantom of Andrew Lloyd Webber’s “Phantom of the Opera.” This iconic musical has earned the distinction of being one of the most successful in history. Winner of more than 50 international awards, over 130 million people worldwide have experienced this eternal love story. With such a massive potential audience, why not bring back the Phantom and Christine to see how life has been for them a decade later. To bring us up to date with these star-crossed lovers, meet “Love Never Dies,” featuring music by Andrew Lloyd Webber, lyrics by Glenn Slater, and book by Ben Elton, based on “The Phantom of Manhattan” by Frederick Forsyth and brilliantly directed by Simon Phillips. Additional lyrics by Charles Hart have been added, with orchestrations by David Cullen and Andrew Lloyd Webber.

The new touring company has arrived at the Hollywood Pantages Theatre with a cast of glorious singers, including the magnificent Gardar Thor Cortes as the love-sick Phantom, and the gifted soprano Meghan Picerno as Christine Daaé. An array of dazzling special effects will have you wide-eyed and smiling as you experience a spectacular roller coaster ride through the current life and times of the Phantom and Christine.

The story begins seven years after the turn of the last century. Ten years have passed since the Phantom vanished from the Paris Opera House. He winds up in New York’s Coney Island where he produces Phantasma, a musical featuring an assortment of eccentric people who perform a potpourri of dazzling gymnastics as well as a bevy of chorus girls under the stern guidance of ballet mistress Madame Giry (Karen Mason,) mother to her aspiring-star daughter, Meg (talented soprano Mary Michael Patterson). The splendid dance sequences were choreographed by Graeme Murphy AO, with the dancers adorned in period costumes designed by Gabriela Tylesova, who also designed the spectacular fairytale sets.

Despite having an outlet for his music, our Phantom is nevertheless frustrated as he still longs for Christine, his only true love and musical protégée and begins to plot how he can bring her back to him. In the meantime, she is now one of the world’s most famous sopranos and is married to Raoul, Vicomte de Chagny (Sean Thompson) and has a son named Gustave (a very talented Jake Heston Miller who alternates with Casey Lyons.) All is not well as Raoul drinks and gambles. To refill the financial hopper, Christine agrees to accept an invitation to sing in New York at a famous opera house so the family leaves Paris and sets sail for the new destination. There is an enchanting sequence of she and her family disembarking from a ship to be met by a coterie of photographers and then are whisked away in a “horseless carriage,” huge enough to accommodate the “Jolly Green Giant.”

Christine and her family are ensconced in a hotel room with a mirror looming in the background and as you might expect, the Phantom emerges through the mirror and with his Svengali hold over her, lures she and her family to the phantasmagoric world of Coney Island illuminated by Nick Schlieper spectacular lighting design comprised of thousands of sparkling, towering, cascading lights, with a gigantic ferris wheel ablaze with shimmering radiance. There is an assortment of clowns and “freaks,” three of which include a trio of Phantom’s henchmen playfully brought to life by Katrina Kemp as Fleck, a tiny person tossed around like a beach ball in the hands of Squelch (Richard Koons,) and Gangle (Stephen Petrovich).

Like in opera and the original Phantom, the narrative is told through music with 30 musical numbers including the dramatic opening song ‘Til I Hear You Sing,’ an introduction to Gardar Thor Cortes’ mesmerizing, soaring voice. While there are no songs that you will leave the theatre humming, nevertheless the score has an overall beauty with an occasional bar of music reminiscent of the original Andrew Lloyd Webber score, which somehow ties the two productions together. Dale Rieling’s excellent music direction of the orchestra was augmented by Mike Potter’s sound design resulting in pitch perfect musical numbers some of which include, ‘Once Upon Another Time’ (Christine and The Phantom;) the tender ‘Look With Your Heart,’ (Christine and Gustave;) the fun ‘Bathing Beauty Rehearsal’ (Meg with the male ensemble dressed in black and white bathing attire of the turn of the century;) ‘Dear Old Friend,’ (Meg, Christine, Madame Giry, and Raoul;) ‘Why Does She Love Me? (Raoul and Meg;) and ‘Conclusion,’ a heartbreaking duet between Christine and The Phantom, concluding with the revelation of a deep secret about Gustave.

Whatever one might think is missing from the storyline, with Simon Phillips’ masterful direction of his Broadway-caliber musical cast, coupled with eye-popping production values, “Love Never Dies” is an entertaining and most satisfying theatrical experience.