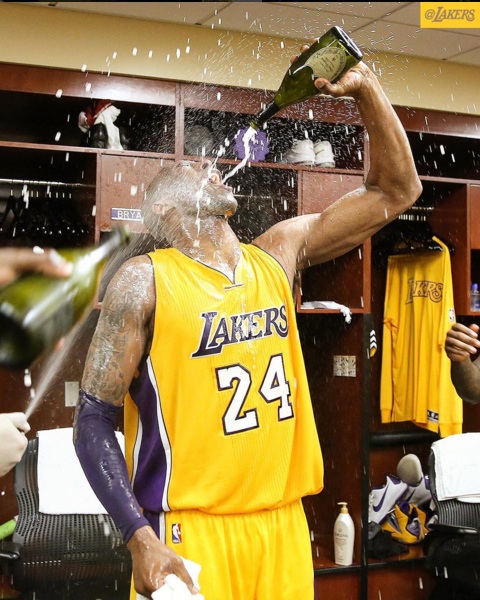 Kobe Bryant scored 60 points in the final game of his illustrious 20-season NBA career tonight, leading the Los Angeles Lakers to a 101-96 victory over the Utah Jazz at Staples Center.

A video tribute to Bryant was shown before player introductions and additional video tributes were played during timeouts throughout the course of the game.

The Lakers end the season 17-65, the worst record in their 68-season history.

Bryant officially became a Laker on July 1, 1996, when the team completed a previously agreed to trade with the Charlotte Hornets, who had chosen him five days earlier with the 13th choice in the NBA draft as part of the trade agreement with the Lakers.

Bryant played his entire career with the Lakers, helping them win five NBA championships, with him being chosen as the NBA Finals MVP for both of the past two championships.

Bryant’s 20 seasons played with one organization is an NBA record. He is among five players to play at least 20 seasons in the league, along with Kevin Garnett, Robert Parish and Kevin Willis, who all played 21, and Kareem Abdul-Jabbar, who played 20.

Bryant was the league’s MVP in the 2007-2008 season, received All-NBA honors 15 times, including 11 first-team selections, and was chosen to play in the league’s All-Star Game 18 times.

Bryant announced his retirement effective at the end of the season on Nov. 29 in a poem titled “Dear Basketball,” published on the website The Players’ Tribune.

“This season is all I have left to give.

“My heart can take the pounding

“My mind can handle the grind

“But my body knows it’s time to say goodbye.”