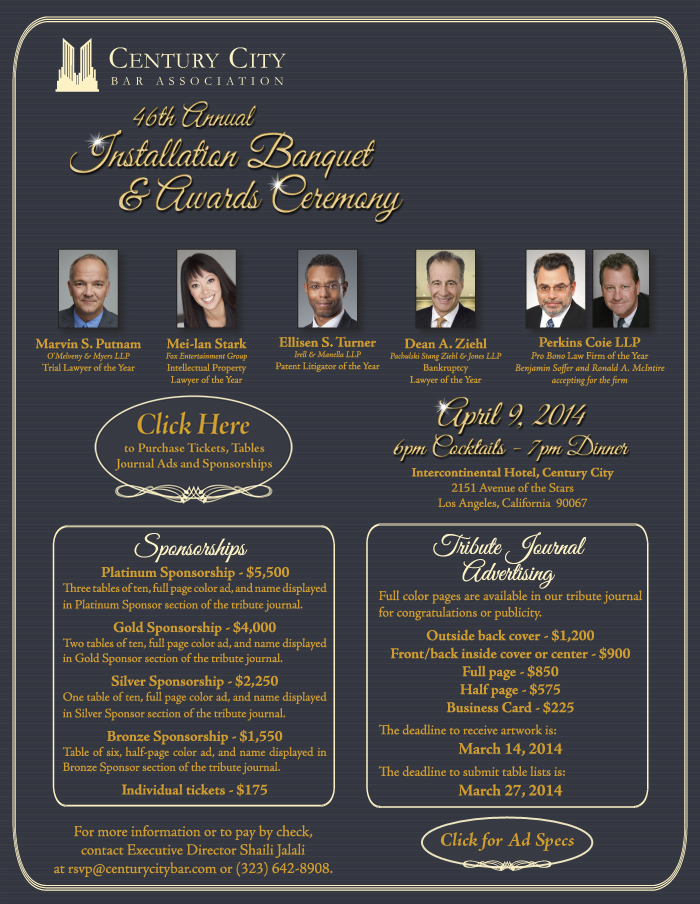 The Century City Bar Association has named its 2014 “Lawyers of the Year” in five different practice areas. Awards will be given at the CCBA’s 46th Annual Installation Banquet and Awards Ceremony at the Intercontinental Hotel in Century City on April 9, 2014.

— Pro Bono Law Firm of the Year: Perkins Coie LLP; Benjamin Soffer and Ronald A. McIntire accepting for the firm.

Loren J. Beck, President of the Century City Bar Association, expressed his enthusiasm for this year’s slate of honorees.

“They have distinguished themselves not only as being among the most accomplished lawyers in their respective fields of expertise, but as leaders in Southern California’s law and business community as well,” Beck said.

“Century City is home to some of the most sophisticated and respected attorneys in the fields of entertainment, intellectual property, high-stakes litigation, trusts and estates, and bankruptcy,” Alderfer said. “This year’s honorees have set examples not only for legal excellence, but for dedication to the legal community as a whole.”

With more than 5,000 lawyers in Century City, the CCBA’s mission is to provide top-quality legal programming, enhance and promote the sense of community among Century City lawyers, honor Century City attorneys who have achieved extraordinary accomplishments, and provide leadership opportunities to lawyers who participate in the CCBA.