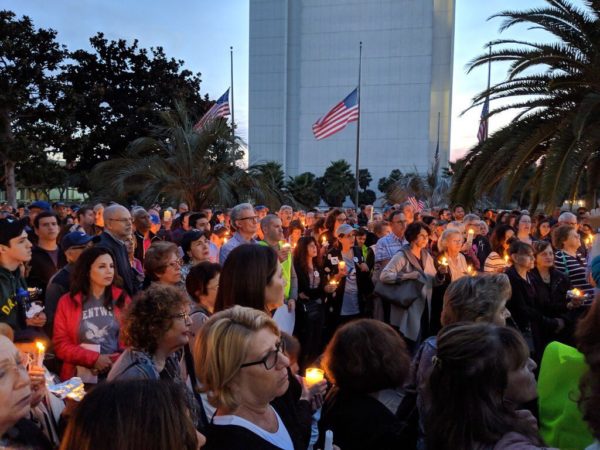 In the wake of the mass shooting at a Pittsburgh synagogue on Saturday that left 11 worshipers dead, local Jewish leaders and lawmakers came together Sunday evening at a vigil on the Westside to pay respect and mourn the tragedy.

“Tonight Los Angeles comes together with Pittsburg. Tonight Westwood is Squirrel Hill. Tonights Jews and Christians and Muslims and people of every faith and even no faith come together at this moment, to light a candle with neighbors, to make a connection,” said Los Angeles Mayor Eric Garcetti at the gathering in front of the Federal Building on Wilshire Boulevard. “Do not be afraid, this is your country.”

Garcetti, who is the first elected mayor in the city’s history, gave an impassioned speech during the vigil, reading the name of the 11 victims killed during Saturday’s worship services.

“I know we are told to be silent in moments like this. To just remember the emotions and not to say anything else…but tonight we will not be silent,” Garcetti said. “When swastikas in this country march by synagogues, when elders are mowed down, when are people are killed as a baby is being named, when our first responders who come to protect us are shot alongside…we will not be silent.”

Jay Sanderson President & CEO of The Jewish Federation of Greater Los Angeles spoke of the importance of putting aside differences and coming together in the wake of such tragedies.

Rabbi Sharon Brous with Ikar LA made clear in her remarks that in mourning the mass shooting, it is important not to forget the hatred that exists in the United States fuleing such tragedies.

“We must be clear-headed and unequivocal in naming and condemning the disease of hatred that has permeated the culture of this nation,” Brous said.

According to the Los Angeles County Commission on Human Relations’ recently released 2017 Hate Crimes Report, while overall religious motived hate crimes did not rise, Anti-Semitic crimes rose four percent from 2016. In addition, 72 percent of all religious hate crimes were targeted at the Jewish community.

On March 3 of this year a serial vandal spray-painted, “Jew Rat” on a bank and a kosher market on the same block. A synagogue is located across the street from the bank.

Los Angeles City Councilmember Paul Koretz, who is Jewish himself and represents much of the Westside, put out a statement following the shooting expressing his sorrows and while offering his office’s services.

“Our prayers are with the families of those killed in this horrendous act of violence. Shalom means Peace,” Kortez said. “In response to the tragedy in the Tree of Life Synagogue in Pittsburgh, please know pro-active measures are being taken by the LAPD and my staff to reach out to our neighborhood Rabbis and Schuls.”

Koretz’s Director of Public Safety Gregory Martayan has been in communication with relevant public safety agencies in the coordinated, unified response to the tragedy. In his statement, Koretz encouraged all Jewish institutions in the Fifth District who may have concerns to reach out to Martayan (213) 505-8420.