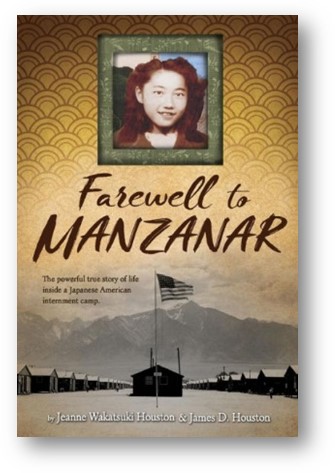 2018 marks the sixteenth anniversary of Santa Monica Public Library’s annual community reading program Santa Monica Reads. Popular with local residents and visitors, the program invites everyone to read and talk about the same book and its themes at special events and book discussions held throughout the city.  The Library is pleased to announce Farewell to Manzanar by Jeanne Wakatsuki Houston and James D. Houston as the 2018 selection.  This year’s program runs from Saturday, May 12 through Saturday, June 16.

It is fitting that Farewell to Manzanar is this year’s selected book. In the wake of World War II, President Roosevelt issued Executive Order 9066, incarcerating tens of thousands of Japanese American citizens and Japanese natives. As a seven-year-old girl, Jeanne’s world is turned upside down when the Wakatsuki family is forced to leave their home in Ocean Park and their fishing business in Long Beach to move to the high desert internment camp of Manzanar. The narrative is told from Jeanne’s perspective, as she recounts the struggles and resilience of her family and the camp community.

First published in 1973, and now celebrating its 45th anniversary, Farewell to Manzanar has sold more than one million copies. The book remains an invaluable contribution to the annals of American history.  Jeanne Wakatsuki Houston has earned numerous honors, including a United States-Japan Cultural Exchange Fellowship; a Rockefeller Foundation residence at Bellagio, Italy; and a 1984 Wonder Woman Award, given to women over 40 who have made outstanding achievements in pursuit of truth and positive social change. In 2006, Jeanne Wakatsuki Houston received the Award of Excellence for her contributions to society from the Japanese American National Museum.  On May 12, at the program An Afternoon with Jeanne Wakatsuki Houston, Santa Monica Mayor Ted Winterer will officially commence Santa Monica Reads by presenting a Proclamation honoring Mrs. Wakatsuki Houston.

Please join us for one or more of the following free special events and book discussions: