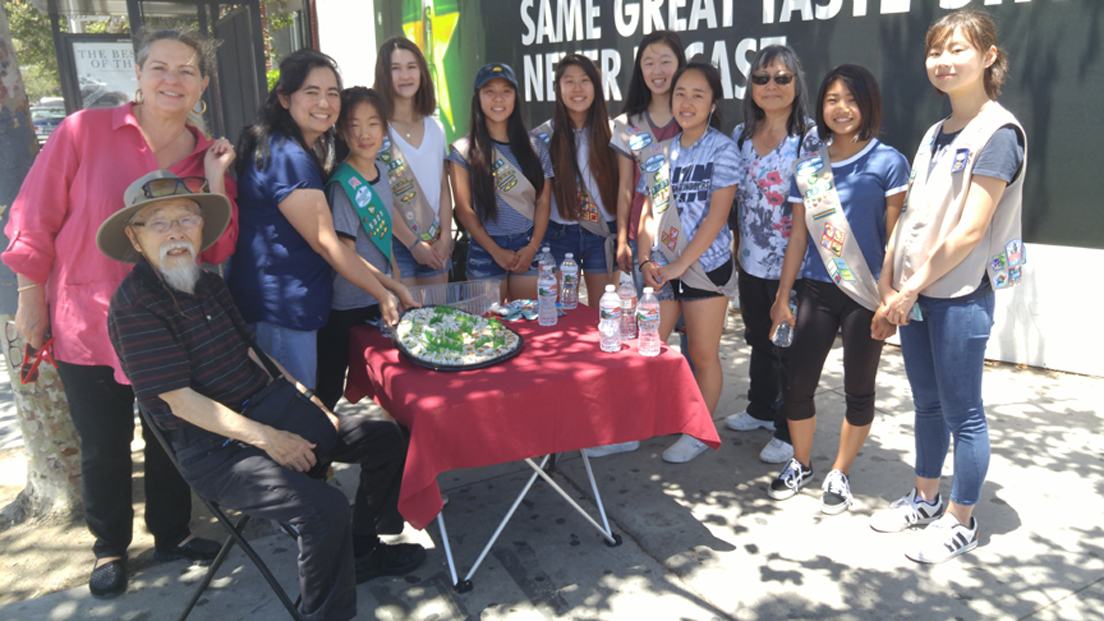 Girl Scout Troop 5325, which meets at the Venice Hongwanji Buddhist Temple, arrived at the northwest corner of Venice and Lincoln Boulevards on Thursday, June 15, 2017, as the first youth group to schedule a volunteer clean-up day for the Venice Japanese American Memorial Monument.

VJAMM Committee members Phyllis Hayashibara, Arnold Maeda, and Suzanne Thompson met the Girl Scouts, and treated them to a sushi lunch donated by Esther Chaing of Hama Sushi in Venice.

Suzanne shows off her Girl Scout pin in the photo with the sushi from Hama Sushi. The Venice Japanese American Memorial Monument was dedicated on April 27, 2017 to commemorate the forced removal of 1,000 persons of Japanese ancestry from Venice, Santa Monica, and Malibu and their required assembly on the northwest corner of Venice and Lincoln Boulevards in April 1942. They brought with them only what they could carry, with only a few days’ notice, and would be transported by bus to the first of ten American concentration camps to be built and eventually administered by the War Relocation Authority, known as Manzanar.

After Japan’s attack on the U. S. Naval base at Pearl Harbor in Hawaii on December 7, 1941, President Franklin Delano Roosevelt’s Executive Order 9066 of February 19, 1942 authorized the U. S. army to declare areas of Washington, Oregon, and California militarily sensitive and subject to evacuation. Without due process or the writ of habeas corpus, 120,000 persons of Japanese ancestry, two-thirds U. S. citizens born in the United States, lost their homes, businesses, and liberties for the duration of World War II. The VJAMM stands as a reminder to all that Constitutional rights can and will be violated unless we all know and exercise our rights, so the powers of government will never again be abused in any unjust discrimination or incarceration based solely on one’s ethnicity, gender, sexual orientation, race, or religion.

The VJAMM Committee plans to schedule monthly maintenance days with various community youth groups with their adult leaders, and seeks donations of refreshments for the volunteers. If interested in volunteering or donating lunch, please contact Phyllis Hayashibara at phyllishayashibara@gmail.com.