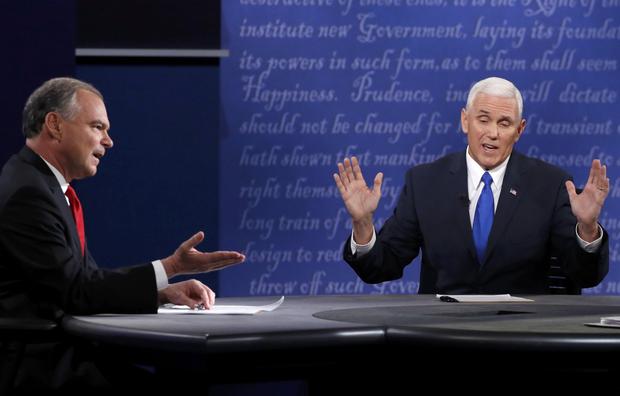 The smallest audience since 2000 tuned into the vice presidential debate, according to figures released by Nielsen today.

The audience was the lowest since 2000, when the debate between Republican Dick Cheney and Democrat Joseph Lieberman averaged 29 million viewers.

The most-watched was in 2008, when an average of 69.9 million watched the debate between Democrat Joe Biden and Republican Sarah Palin.

Vice presidential debates have been held every four years since 1976, except for 1980.

Viewership of the debate on the four major broadcast networks will not be counted toward their weekly averages because the coverage ran without commercials.

However, commercials were included in the coverage by the three major cable news networks and will be counted in their weekly averages. Fox News Channel drew the largest audience on cable for the debate, averaging 6.116 million viewers.

TBS’ coverage of the American League wild-card game between the Baltimore Orioles and Toronto Blue Jays, which ran opposite the debate for about 90 minutes, averaged 4.195 million viewers.

Viewership was 44.8 percent less than the 7.604 million average for last year’s American League wild-card game between the Houston Astros and New York Yankees, which was carried by ESPN.

In addition to the debate, other possible factors for the decline in viewership was that the game only involved one team for the U.S., denying it huge viewership in the home market of the second participating team, and the absence of the Yankees, from the nation’s largest media market and long of one of the most popular teams nationwide.