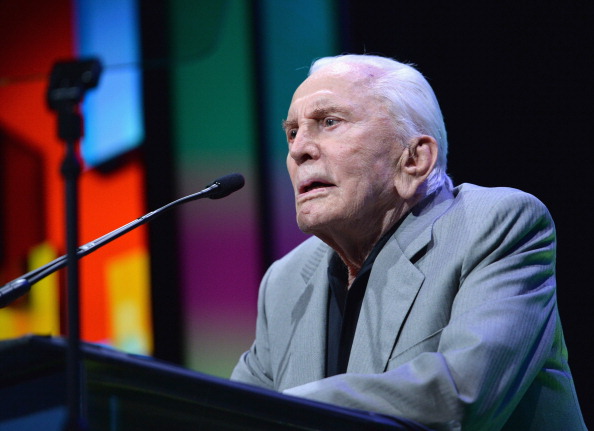 The two-story Kirk Douglas Care Pavilion for 80 industry members struggling with the disease is expected to break ground late next year.

The facility will feature small “neighborhood” environments with the look and feel of a home — as opposed to the typical hospital setting — with a wandering garden and other contemporary amenities and programs, said Jeffrey Katzenberg, chairman of the MPTF Foundation.

Douglas and his wife, Anne, kicked off the design and planning of the facility with a $15 million gift, Katzenberg said.

“It is in keeping with Kirk’s philosophy of giving back to the entertainment community that he is the one giving us the gift on his birthday instead of us lavishing one on him,” Katzenberg said.

“And with their recent commitment to MPTF, Kirk and Anne Douglas are some of the largest donors in the history of MPTF giving, with over $40 million of lifetime philanthropy,” he said. “We will never be able to thank them enough for all that they have done.”

In 1992, the couple helped create an Alzheimer’s unit at the MPTF named Harry’s Haven for the actor’s father.

“What MPTF has done at Harry’s Haven over the past 25 years never ceases to amaze me,” Douglas said. “We wanted visitors as well as patients to experience a warm and loving environment, and MPTF has fulfilled our wishes admirably.”

The actor added, “When Jeffrey Katzenberg explained the urgency of enlarging the current facility to accommodate more patients, we had to say yes. Jeffrey knows it is our philosophy to provide funding where it is needed most. The Kirk Douglas Care Pavilion is going to help a lot of families in our community.”

The first floor of the Douglas pavilion will be the new home of Harry’s Haven, said Bob Beitcher, MPTF president and chief executive officer.

“Kirk was visionary when in 1992 he recognized the implications of dealing with Alzheimer’s not only for those directly impacted but for their family members as well,” he said. “MPTF is honored to be a part of the legacy of caring for our own that Kirk Douglas embodies by his words and his actions.”

To celebrate his birthday, Douglas and Katzenberg introduced the KDCP website at www.mptf.com/kirkdouglas, where visitors can take a virtual tour of the new building and learn how they too can participate in funding its design and completion.