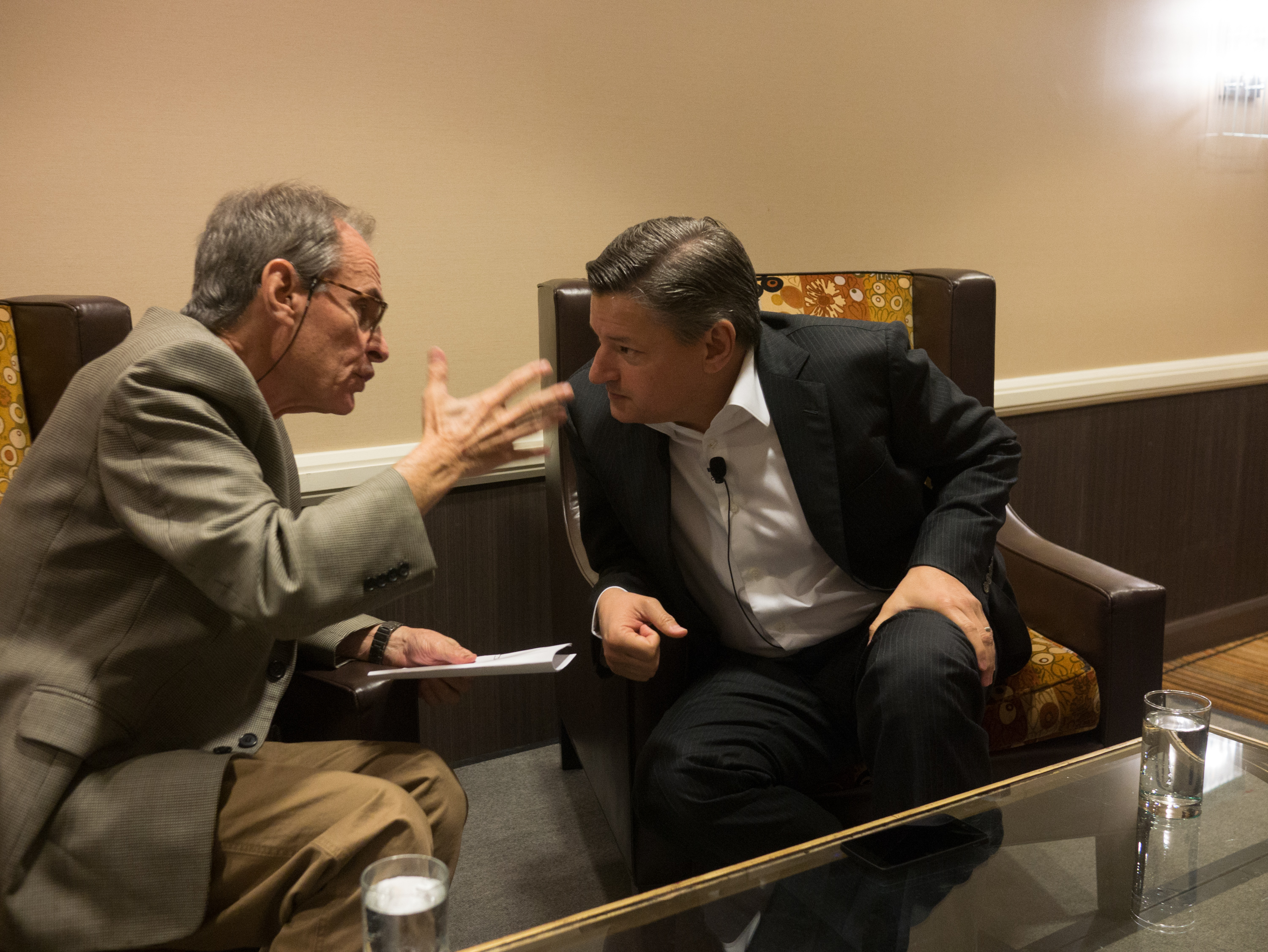 For all the attention House of Cards has received in 2013 and 2014, it is easy to associate the political thriller with Netflix. A scripted drama not available on network television or cable outlet, it has been put out there Netflix changed the way consumers view content. Netflix chief content officer Ted Sarandos, however, says the digital company is all about catering to the customer.

Sarandos shared his thoughts as part of a one-on-one interview with The Caucus for Producers, Writers, and Directors during a breakfast pow wow at the Hyatt Regency Century Plaza in Century City on June 9.

“I’m trying not to pick shows that define us,” Sarandos said of the association of Netflix with House of Cards. “Our brand is really about personalization. The brand is finding the thing you love that you can’t find anywhere else.”

Turns out House of Cards was the “guinea pig” to find out whether the show would capture a desired audience. It was also a marketing tool. By pushing the show, Netflix was effectively promoting itself as a destination for, what Sarandos explained, as “the thing you love that you can’t find anywhere else.”

And look at what Netflix has done since House of Cards, distributing shows such as the comedy-drama Orange is the New Black, horror series Hemlock Grove, comedy-drama Lillyhammer, comedy Bad Samaritans, and the fourth season of Arrested Development. All but Bad Samaritans and Arrested Development were picked up for a second season; season three of House of Cards is already in the works.

Also distributed by Netflix are specials, miniseries, or films such as the stand-up comedy movie Russell Peters: Notorious, and documentary Mitt.

The move to create a steady lineup of original programming on its digital platform is all part of what Sarandos sees as a “sizeable shift” in television market.

“When I look at the hours of engagement, we can be competitive with any other network,” Sarandos told Rosenberg.

Specifically, the model of watching a show or series at a scheduled time and day appears to be dying.

Hence, Netflix looks to deliver the best content it deems possible without placing that content in the construct that it must viewed, say, every Wednesday evening at 8:30 p.m.

The first season of House of Cards for example, had its highest viewership in the days leading up to the second iteration of the series earlier this year, Sarandos said.

Accordingly, Netflix does not release ratings as an ABC, NBC, CBS, Fox, or any other terrestrial network would. Since Netflix viewers watch on their own respective time, the need to measure a show’s ratings is irrelevant. The digital distributor is not trying to demonstrate it has five million viewers nationwide watching a specific piece of content at 4 p.m. on a Sunday afternoon during football season.

Instead, as Sarandos noted, Netflix’s brand is personalization. To make its platform friendly to its users, Netflix places emphasis on scouring for “great content.”

In addition to execution, Netflix also relies upon crunching numbers to try to create predictors of taste preferences.

“We have access to data. What we can do with it is size the market,” Sarandos said, pointing out Netflix has the ability to study what its users watch, cross-reference the data to see what is popular, and have its digital finger on the pulse to determine what individuals and larger groups of people are watching.

Of course, before House of Cards, the data only told the story of what Netflix subscribers viewed on its streaming service or the DVDs/Blu-rays members received at home via mail.

Sarandos said Netflix headed into the original programming market when it became evident the company did not have any content that could not be found elsewhere.

That realization, combined with the data it had available and a risk assessment of what would work out, eventually led to the development and release of House of Cards.

When House of Cards released in early 2013, all episodes released at once, leading to an allegation that Netflix created the phenomenon of binge viewing.

Sarandos disagreed, saying it is the viewers who created binge viewing.

One area Sarandos said Netflix has no plans to foray into is unscripted or reality television, which met with a loud applause by the 100 or so attendees at last week’s breakfast meeting of The Caucus.

Netflix is also looking to expand into Latin America (with series such as the Pablo Escobar drama series Narcos) and Europe.

Beyond Netflix, Sarandos shared a quick thought about the Comcast/Time Warner Cable merger.

“I don’t think anyone should have that much power,” he told Rosenberg.