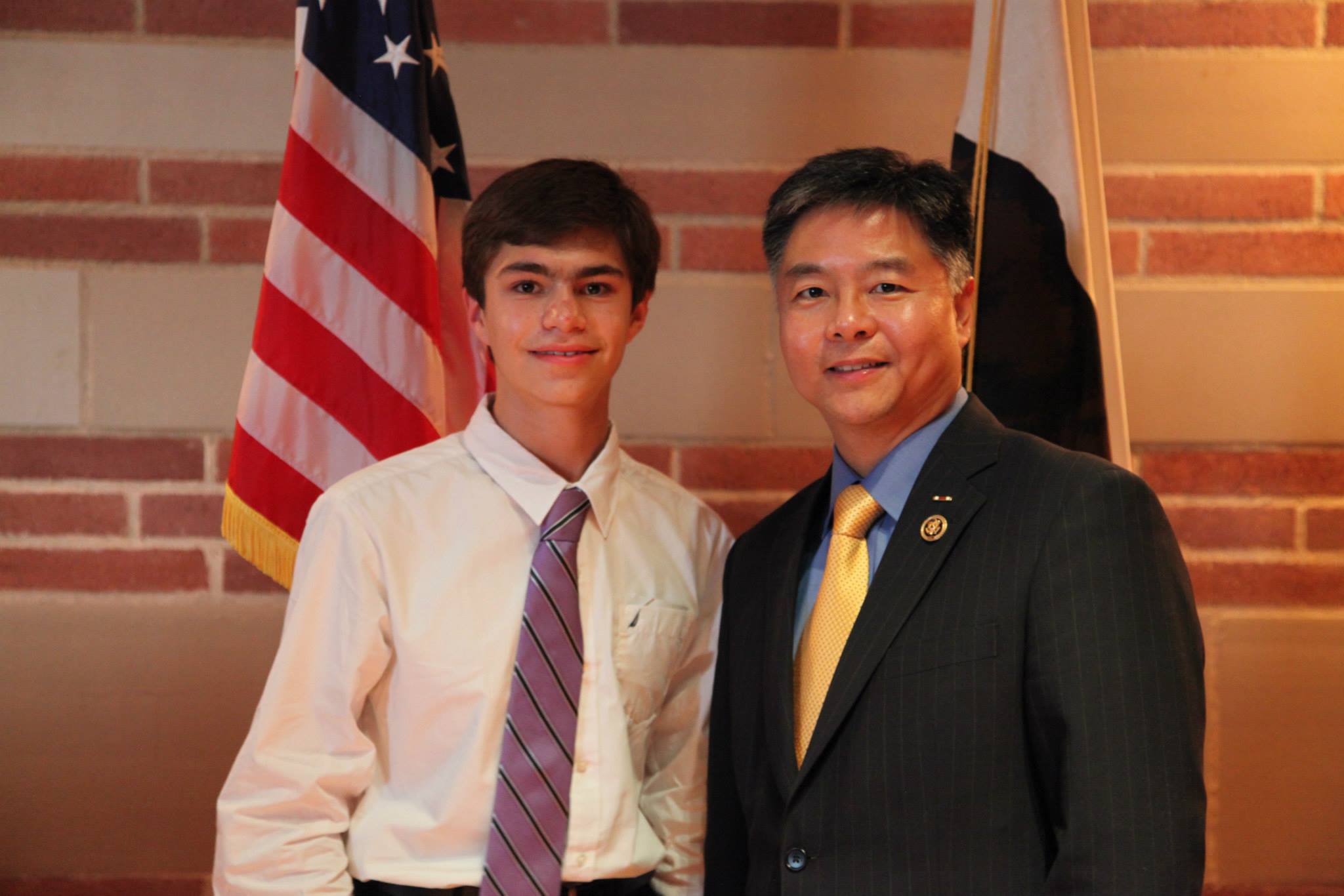 “I take this obligation freely, without any mental reservation, or purpose of evasion, and that I will well and faithfully discharge the duties of the office on which I am about to enter.”

So went the oath of office of Representative Ted Lieu at his Los Angeles swearing-in ceremony – but not before a fire alarm at UCLA’s Royce Hall on Sunday, March 1, forced nearly 1,000 people out into the rain while firefighters investigated.

Directly after “God Bless America,” the fire alarm went off and everyone was told to evacuate the building.

Firefighters eventually entered and announced that it was a false alarm, and that someone had pulled it from the basement. Audience members filed back into the hall in a mere 12 minutes.

Finally, the newly elected Representative Lieu and his family took the stage, where Circuit Court Judge Jacqueline Nguyen presided over his Oath of Office.

Perhaps the most important moments were those when Lieu was on the stage, sharing with the audience his beliefs, goals, and attitudes.

He discussed his views on climate change, and how he was at the front of the climate change issue in his time as State Senator, and how he will continue to fight for the planet. “There are a thousand issues Congress faces, but only one of them can kill the entire species – climate change.”

“I am confident that Congress will one day pass comprehensive immigration reform,” said Lieu, when speaking on one of the most critical issues of today’s political scheme.

The congressman also stressed the importance of the middle class. “We went into a recession because the middle class couldn’t buy anything,” he explained. “By increasing their purchasing power, we increase our GDP.”

He also said that there are “too many voices not included” in government, such as those of the middle and lower classes.

One of the most ambitious goals of the Stanford alum was to push for an amendment to the Constitution.

“I’m going to pass a constitutional amendment to repeal the Supreme Court decision,” he said, referring to the 2010 Citizens United vs. Federal Election Commission decision that stated that “corporations are people.”

As for the difficulty of accomplishing this goal of his, other than the Bill of Rights, there have been only 17 amendments out of over nine thousand proposals.

The representative also spoke of his life, and how he has lived the American dream. Born in Taiwan, Lieu immigrated to Cleveland, Ohio.

His family operated a gift store and then expanded to six locations.

Following his relocating to California, the politician rose through the ranks of public service from a Torrance City Councilman to the steps of Congress as Democratic Freshman Class President of the House.

Ended by a thunderous applause, the ceremony marked a new political era in Lieu’s 33rd District.

The event began with the Nicholson Pipes and Drums, who played for the audience, followed by the Torrance Firefighters Honor Guard setting the three flags in place without missing a beat.

The ceremony was attended nearly a thousand people, including dozens of elected officials from various parts of the 33rd Congressional District. Los Angeles Mayor Eric Garcetti, Representatives Maxine Waters, Karen Bass, and Xavier Becerra, and actor Tim Robbins were present for the ceremony, each giving a speech in honor of Representative Lieu.

Speeches were also given by Rabbi Meyer May, UCLA Chancellor Gene Block, and Father Sunwoo, while Manhattan Beach Council member Amy Howorth served as the Mistress of Ceremonies.

The New Directions Veterans Choir performed by singing the “Military Medley” and “God Bless America.” Each speech and musical break paid tribute to Representative Lieu and the United States.