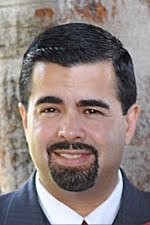 Levette Crespo has been identified as the person who shot her 45 year-old husband multiple times during a family dispute at their apartment in the 6300 block of Gage Avenue.

The argument erupted around 2:30 p.m. Tuesday and escalated when the couple’s 19 year-old son, also named Daniel, became involved. Daniel was subsequently treated for facial injuries at a hospital, the Los Angeles Times reported, and was then questioned by Los Angeles County Sheriff’s Department homicide detectives, as was his mother.

The sheriff’s department announced late Tuesday that neither were arrested. Instead, the department said, the facts of the case would be presented to the District Attorney’s office, which will decide whether to file criminal charges.

Crespo had been a deputy probation officer for Los Angeles County for 15 years, according to his biography on the city website, most recently working in a gang and narcotics unit.

He was elected to the Bell Gardens council in 2001, and elected Mayor in December, 2013.

State Senator Ricardo Lara and Assemblywoman Cristina Garcia, both of Bell Gardens, jointly described Crespo as “a respected public servant who dedicated his life to protecting and helping others in southeast Los Angeles and throughout the region.”

Crespo’s city biography said he married Levette, “his high school sweetheart,” in 1986. Their eldest child, a daughter, was born the following year.