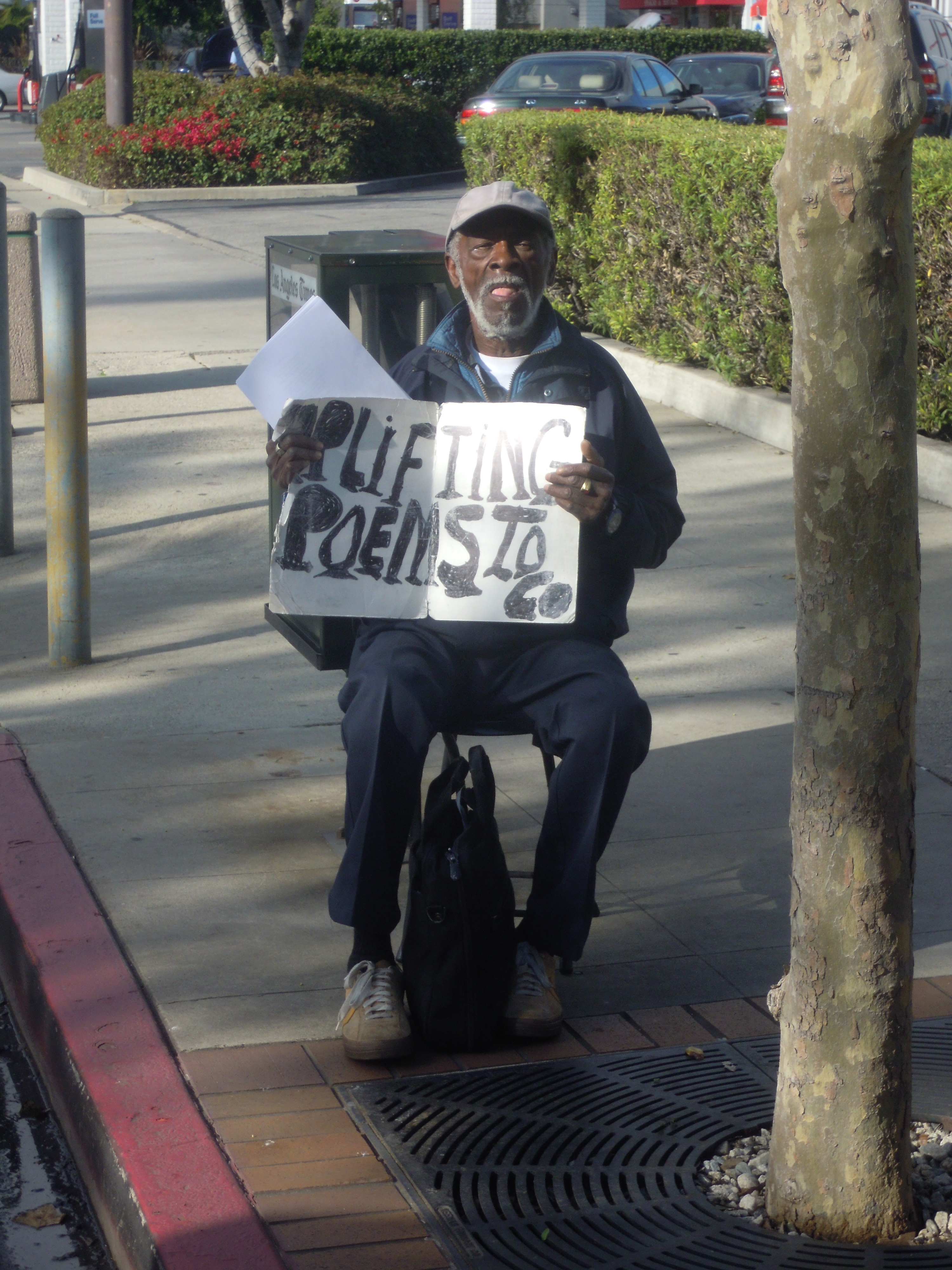 Wendell was a Brentwood fixture for years, selling poems he wrote from the sidewalk just in front of Vicente Foods and Pharmaca.

Wendell was known for his positive demeanor and upbeat philosophy of life.

Motorists and passersby regularly bought Wendell’s poems or gave him a contribution of food or cash. Many gave him items purchased at Vicente Foods or the Farmers Market.

“I’m saddened to hear this,” said Bob Inadomi, general manager of Vicente Foods.  “He was a good and gentle soul.”

“Oh no!” said Lance Rosenzweig, Brentwood resident, upon learning of Wendell’s passing. “We just saw him a couple of weeks ago – we bought him a hot dog and some plums.  He had been away for a few weeks, and we were so happy to see him back.”

Rosenzweig said his son, Bogie sometimes saw Wendell when Bogie walked home from the school bus, and Bogie always gave him a yogurt or a fruit.

“I loved his poems and his gratitude for life,” added Rosenzweig.  “I’m really going to miss him.”

The following background information, prepared by Eric David, was found on iPoet.com, telling something of Wendell’s history.

Wendell Brown was born in 1945 in Little Rock, Arkansas, to William and Lucille Vines and at the age of 14 moved with his family to Los Angeles.

When he turned 21 he was drafted to fight in Vietnam. While in Qui Nhon as a sergeant, he suffered from an experience that changed his life. In a letter to (former California) Senator Alan Cranston, Brown reiterated his experience as follows: “…the young lady I was with saved my life because she motioned to me to be silent. I rolled over reaching for my weapon as a Vietcong soldier was prodding where I was with a combat knife. I watched holding my breath, while my heart was about to explode out of my chest. In horror I saw the knife plunged effortlessly into the middle of the girl’s chest. I lost all control and started firing repeatedly, killing two Vietcong soldiers and an officer. Their deaths did not relieve my shock but added to it.” This incident has permanently affected Wendell.

While working as a bricklayer in 1983, he was standing on a ladder, when he saw the image of the girl’s death. This flashback caused him to fall off the ladder and dislocate his back. He has been afraid to work ever since that accident and has been on the streets ever since.

He has received psychological help and 90 days of treatment, but he’s unsure if he’ll ever be cured. In 1991, Wendell came to Brentwood bearing a well known sign “WILL WORK FOR FOOD.”

This sign wasn’t very successful, so he started changing his signs daily, to slogans that were entertaining. “When you give someone something, they are more likely to help you out,” said Brown. “Those signs were my way of giving to people, and because it was successful, I had the idea to give my poetry.”

The residents of Brentwood were at first reluctant to accept him into their neighborhood, but things have sure changed. ‘Brentwood is like a family to me,” he said. “I know if I’m hungry, within 30 minutes I’ll have some food, and within a few hours I’ll have some money.”

“No matter what happens to me, I will keep writing the rest of my life because I’ve always pictured and seen things different from other people,” said Brown. “There’s a different kind of beauty in the life I see and writing helps me see that beauty.”

Wendell Brown is a unique individual who has lived a life most of us are unfamiliar with. His poetry is designed to make us all think, and realize how fortunate we are.

Just sitting and listening to Wendell, one is able to learn about the trials and tribulations of a homeless Vietnam Veteran — a man who was sent to fight for our country, and returned a different man.

Here’s a poem written by Wendell in which he discusses his Vietnam experiences.

Ballad of a Bushman:

Some clustered bushes shelter me,

In loneliness and misery,

They shield me from the wind and cold,

And help keep what hopes I hold.

I gave my best for Uncle Sam,

And came back dead from Viet Nam,

When afterwards at home again,

Just one among forgotten men.

My world had changed, I was alone.

Nobody cared. No welcome shown.

From eyes of strangers, eyes of friends

My heart was broken, would not mend.

Such awful scenes of dead mankind

Blood-soaked the regions of my mind.

For me the loss of days, long gone,

Leave me no choice, but to wander on.

What do I seek and do not find?

Where is the comfort for my kind?

No cheerful hearth awaits for me.

My days plod on eternally.

I have the mountains and the sea.

With “people-boxes” row on row.

Commercial treadmills in the sky.

I too need money, that is true.

In meager bits I beg from you.

I am not proud, I have no wealth.

I am thankful just to have my health.

My wants are few, but this I’ve found,

What peace is mine, comes from the ground.

God’s friendly bushes are my “pad”

They gave what little ease I’ve had.

They know, as I, that men must die.

Before that time I want life

With simple comforts, kids and wife.

For now, I live the life I’ve got.

A victim of the war I fought.

The bushes know, I’m sure they do

They shelter me, and others too.

They always greet me as a man.

They keep me warm as best they can.

They shade me from the blazing sun.

And welcome me when the day is done.

But how long will my bushes stand

I pray for bushes. Let them be.

And finally, in honor of Wendell — who wrote many upbeat poems about the human condition, the holidays and pretty much whatever was on his mind that day — it’s fitting to finish on a positive note.

Here is Wendell’s ode to Brentwood.

Brentwood now has come to be

The one and only home for me.

Out here since before ninety two.

I’m selling poems to see me through.

The reason I’m the way I am

Goes back to war in Viet Nam.

Scream through my mind now and again.

I find relief in poetry.

The rhyming words, the symmetry

To me Brentwood’s a special place,

A showcase of the human race

Exhibiting the lighter side

Of folks without a thing to hide.

Where normal is to get and give

Without much undue emphasis

On either way, what’s mine or his.

And Brentwood climate is so great,

The world should try to imitate.

Fresh moving breezes from the sea

Added to this I find that I,

“Though somewhat in the public eye,

Have been accepted, more or less,

To make my life a fair success.

I hope the Brentwood neighborhood

Will flourish and remain as good

Or better than it is right now,

But I confess I don’t see how.

Goodbye, Wendell. Thanks for being you. Your little corner of Brentwood will never be quite the same.