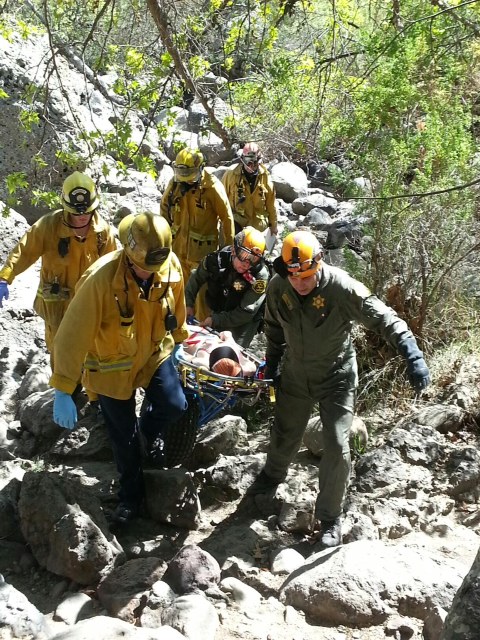 On Monday, March 17, 2014 at 12:35 p.m., Los Angeles County Sheriff’s Department’s-Malibu Search and Rescue (SAR) team, received a call of an injured person at the “rock pool” in Malibu Creek State Park, 1925 Las Virgenes Canyon Road, Malibu. Upon their arrival, Malibu SAR team members met up with Los Angeles County Fire Dept. (LACoFD) personnel, and learned that a 19 year-old male had jumped from a cliff and into the “rock pool.”

Two bystanders, who were off-duty lifeguards, saw that the male had suffered an injury and had not surfaced from the water. The two bystanders then jumped in and pulled the unconscious male from the bottom of the water. Once pulled from the water, the male began to breath. LACoFD, Malibu SAR, California State Park Rangers and paramedic personnel all worked together to secure the patient in a rescue basket and escorted him to safety; he was then airlifted by LACoFD Copter 11, to a local hospital for treatment.

While tending to the injured male, another bystander alerted rescue crews to an unrelated injured woman who had broken her foot about 30 yards from their location. After evacuating the male, Malibu SAR and additional rescue personnel went back to the “rock pool” area, secured the woman in a rescue basket and brought her to an awaiting ambulance.

Katz went on to say that “the rock pool area is the busiest site for rescues for Malibu SAR, and was the site of a large water related rescue of four stranded hikers during the torrential rains in Los Angeles just two weeks ago.”

For more about news from the County Sheriff’s office, please visit www.lasd.org.