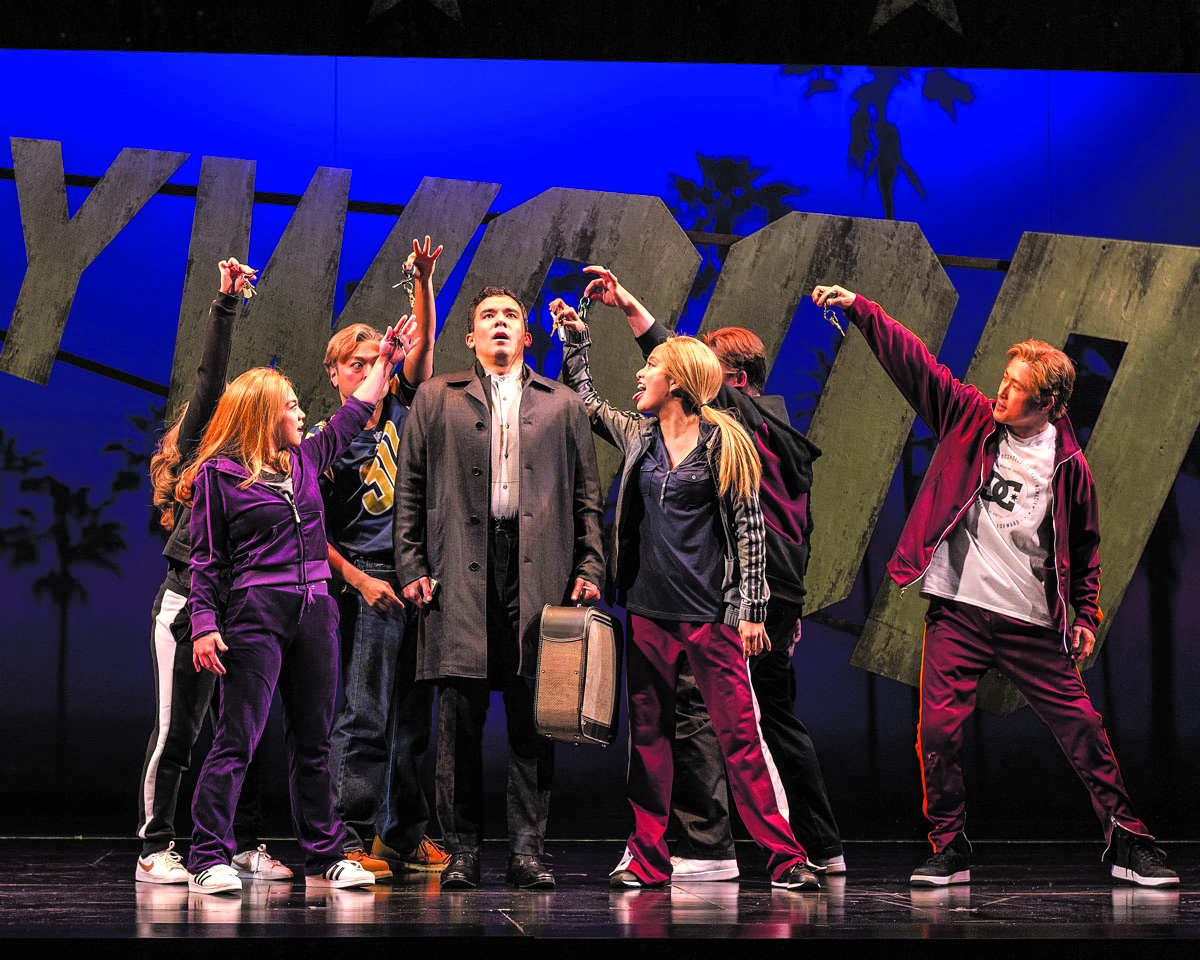 King of Siam: “There are times I almost think

I am not sure of what I absolutely know

In conclusion, I concluded long ago”

Most play reviews are a slam-dunk to write, especially when the storyline is linear, with the action taking place in one specific time period. However, in sitting down to write my review of the brilliant, but sometimes inscrutable, Soft Power,

“A Puzzlement,” from The King & I, as sung by Yul Brynner, came to mind as a reasonable description of what unfolds in this astonishing production. This is not a thin-air quotation choice, as that iconic work plays a role in the storyline of this stunning collaboration between Tony-winning playwright David Henry Hwang, Pulitzer finalist for 1988’s M. Butterfly, and Tony-winning composer Jeanine Tesori (Fun Home).

Produced in association with East West Players and the Curran, the Center Theatre Group is presenting the world premiere of Hwang’s fascinating Soft Power.

Extraordinarily directed by Leigh Silverman, this is a contemporary play with seemingly multiple intentions, among which could be a love letter to American Musical Theatre. The play is a unique theatrical examination and satirical send up of everything American, including politics, elections, our value system, social mores, pop and drug cultures, racist behavior, illicit love affairs, politics, infidelity, ambition, mob mentality, and the nation’s obsession with gun ownership. The playwright’s incisive observations and subsequent skewing are presented through a highly stylized theatrical lens.

Soft Power is not exactly a musical, but has exciting song and dance numbers nestled in between scenes with spoken dialogue. The opening action takes place in Hollywood in early 21st century where a young writer, excellently played by Francis Jue as Hwang, (DHH) is pitching his script to a Chinese production company executive played by the remarkably talented Conrad Ricamora, who brings acute acting and soaring musical versatility to his character of Xue Xing. As they go through the script together, Xing finds many faults in the writing, challenging much of the innocent intentions behind some of the lines. Philosophical discussions abound with the Xing explaining that cultural influence is thought of as soft power. Perhaps commenting on the multiple infidelities committed by Donald Trump, the married executive, with a family back in China, inserts into the discussion his actress girlfriend Zoe, a much younger woman with whom he is having an affair. He not so subtly insinuates that he wants her to have a part in the film. Gifted actress Alyse Alan Louis gives a heartfelt performance as Zoe who wants Xing to leave his wife, which he refuses do because of “tradition.” However, she will knock your socks off in her satirical and irreverent, but still loving, portrayal of Hillary Clinton. In one of the multiple eye-popping song and dance sequences, excellently choreographed by Sam Pinkleton, Hillary is running for president, and appears at a political rally. On one of the spectacular sets designed by David Zinn, who took the familiar McDonald’s golden arches and morphed them into the realm of fantastical re-imagining, Hillary slides in on a mega giant “Grand Big Mac” replete with lettuce and cheese oozing out of its sides. Wearing a layered costume, eventually she disrobes down to her Super Woman outfit and belts out “Democracy,” a production number that is a showstopper. Inserted into this phantasmagoric story, is a love affair that ensues between Xing and Hillary. After she loses the election, Xing finds Hillary hidden away gorging on pizza and ice cream and holds out a helping hand. It’s a funny scene but Louis’ excellent acting reveals some of Hillary’s pain through subtext.

The Chinese panel discussion at the top of Act II, which takes place in Shanghai, China in early 22nd century, is particularly amusing as by that time in China’s history, they rule pop culture and have taken credit for the musical theatre genre insisting that American musicals had no merit as they produced silly plays about “cats” or “talking lions.” The rest of Act II once again revolves around the two time lines illuminating through sharp dialogue and 15 production numbers, the inherent struggles.

With additional lyrics by Tesori, a few of the wonderfully executed Broadway caliber production numbers are: “Welcome to America” (Ensemble,) “I’m With Her” (Betsy, Hillary, Bobby & Ensemble,) “It Just Takes Time” (Xue Xing &, Hillary,) “Good Guy With a Gun” (Veep & Ensemble,) “I Am (DHH & Xue Xing,) “Happy Enough” (Xue Xing & Hillary,) and the dazzling “Democracy”(Hillary), which is reprised at the end of the show.

Soft Power could be summed up this way: Despite its somewhat confusing circular timeline, where we see a scene that was previously talked about earlier, be dramatically enacted in a later scene, this is one of the most creative and intellectually stimulating plays to come down the theatrical pike in a long time. Yes, the play is an over-the-top, absurdist look at the fads and foibles of pop culture and the ludicrousness of our politics, but romance and laughs also abound and no cow is too sacred to not be skewed. For my money, this work by David Henry Hwang should be should be nominated for a Pulitzer, and you owe it to yourself to hurry to the Ahmanson before the June 10 closing for a most memorable evening of theatre.

(ticket prices are subject to change).