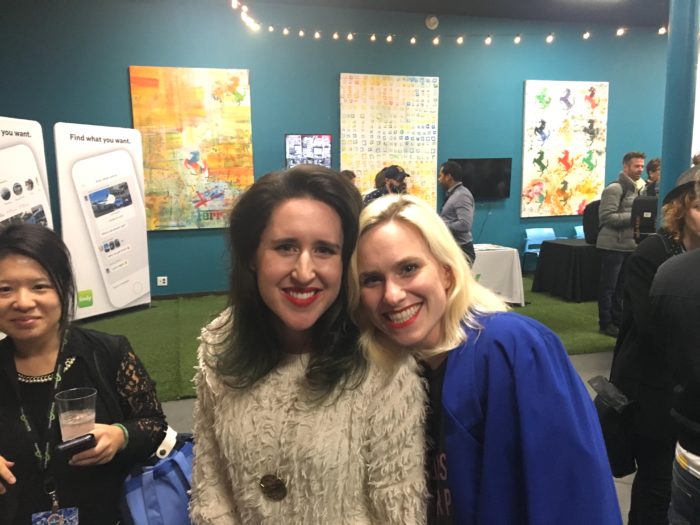 Friday, Dec. 1 at Silicon Beach Fest was a real head turner – so much to see, hear and learn — all at once.

And this was just one day of a four-day event.

The event was held at the CTRL Collective offices in Playa Vista.  This very cool setting established the mood for the day-long explosion of new ideas that would follow.

In a “Shark Tank”-like pitch-fest, there were two companies that clearly ran neck-and-neck in the competition.

Blue Fever, which won the “show of hands” vote from the audience, is an app that sends positive and helpful messages, via text, to mostly teenage girls seeking reassurance.

“Everybody needs a best friend” is how Blue Fever’s Greta McAnany put it.

For more information, go to bluefever.com.

The panel of judges, who were out of the room when the audience voted, clearly liked Blue Fever, but selected DASH Systems as the competition’s top winner.

DASH has come up with a very interesting way of getting help to people in post-cataclysmic situations – floods, hurricanes and other natural disasters.

The company employs a GPS flight controller that allows boxes dropped out of airplanes (with parachutes attached) to land within 10-30 feet of the intended target, explained CEO Joel Ifill.

Drones can’t do this, because the boxes are too big and too heavy, he said.  And planes and helicopters often have no place to land in a situation like this.

Simply dropping boxes out of planes, even with parachutes, can result in helter-skelter deliveries, with boxes getting lost in out-of-reach places, added CTO Joe Caravella.  DASH System solves this issue.

DASH’s boxes are made of cardboard and styrofoam and have wings attached to the boxes that help guide them to the right landing place.  The GPS flight controller — with the landing coordinates set in advance — works together with the wings and the parachute to make sure the boxes land in the right place.

DASH recently helped out in Puerto Rico and is now in touch with Red Cross and other humanitarian organizations that might use DASH’s services in future emergencies.

The DASH system can also be used to make commercial deliveries in out-of-the-way places.  The company is exploring any and all applications for its product.  For more information, go to: dashshipping.com.

In a session on raising capital, moderated by angel investor Asher Leids (Leids was early into Uber), panelists gave the audience tips on raising money.

“Why are you doing this?” is a question Michael Tam of Crosscut Ventures likes to ask entrepreneurs, quickly followed by: “Is this a problem truly worth solving?”

Brian MacMahon, who runs Expert DOJO in Santa Monica, said it was important to “knock the creativity” out of founders, forcing them to focus on issues of business development.

“Be real,” he said.  “You need to make money for your investors.”

Britt Danneman of Alpha Edison Ventures said, “You need to have real clarity of vision and you need to be able to communicate that vision well.”

In another panel on the role accelerators can play in getting startups launched, Heidi Hubbeling of Stubbs Alderton said her accelerator program focuses on tactical steps entrepreneurs need to take.

Eric Pakravan of Amplify.LA said he’s open to most any interesting proposal but suggested entrepreneurs “keep it short” when first inquiring.

In a panel on influencers and social media, all seemed to agree authenticity is key.  Video production values are nice, but not critical.

“People just want to be part of something,” said Jarrel Pyro2Sick, a YouTube producer.

That said, if you really want to make it in today’s social arena, it helps to have followers, said Sara Mills (“Sara on the Internet”).  Mills is a beauty and fashion blogger who has 590,000 Instagram followers.

Mills said her followers make her more interesting to potential partners, as they know she can help them gain more audience more quickly.

For more information about Silicon Beach Fest, go to SiliconBeachFest.com.