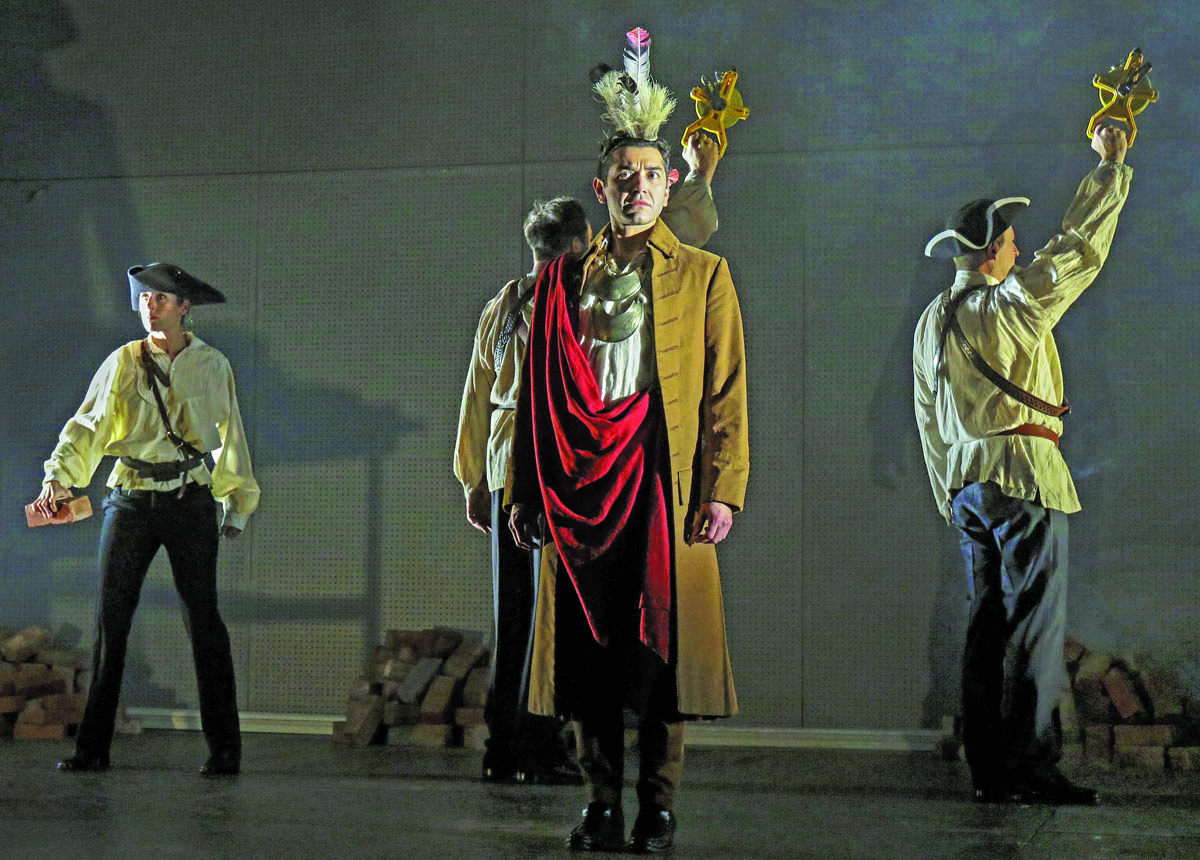 Center Stage with Beverly Cohn, Editor-at-Large| Thomas Jefferson, Tadeusz Kościuszko, King George, William J. Casey, John F. Kennedy, Bobby Kennedy, Ronald Reagan, Native Americans, CIA, American Revolution, Poland’s underground, Slavery, Civil War, Civil rights, Dr. Martin Luther King Jr., war on terror, fight against Communism, Catholicism, martyred priests, CIA covert operations, the film “High Noon,” and the influence of jazz in our international relations. This will give you an idea of the scope of the people, places, and events depicted in the Critical Mass Performance Group’s production of “Ameryka,” recently on stage at the Kirk Douglas Theatre.  You might think doing a play encompassing all those historic characters and world events is an impossible task and you would be right as under the direction of Nancy Keystone, playwright and Founder/Artistic Director of Critical Mass Performance Group, what we have is a rather sophomoric example of biting off much more than you can professionally chew.

The play is a 2 ½ hour rambling rant, which basically moves back and forth through the centuries with historic characters deliberately appearing in the wrong era to quote from a famous speech such as Thomas Jefferson’s “We hold these truths to be self evident, that all Men are created equal” or to discuss the current problems at hand.  At its core, the story attempts to depict America and Poland’s struggle for freedom and with it’s complicated narrative and sprawling scope, one can’t help recognizing the enormous amount of effort that went into the six years devoted to the development of this piece which, for some reason, was presented as part of Center Theatre’s Group Block Party, which is a celebration of theatre.

To her credit, Keystone assembled a talented ensemble and despite the unwieldy narrative, there are outstanding performances by a few cast members including: Ray Ford (Gene Jefferson) and Lorne Green (Curtis Brown), who light up the stage with their characterizations of jazz musicians who are about to embark on a goodwill tour to Poland.  Valerie Spencer (Anna Walentynowicz) and Liza Seneca (Ewa), each of whom deliver excellent performances in their multiple roles.  Along with other “characters,” they take turns breaking the fourth wall to deliver exposition of the events we’ve just seen or historic events about to unfold. Other members of the ensemble are: Curt Bonnem, (Thomas Jefferson,) Russell Edge (William J. Casey,) Richard Gallegos, (Chief Little Turtle,) Jeff Lorch, (Tadeisz Kościuszko,) and Nick Santoro (Agent Weller).

When one-quarter of the audience leaves following intermission, that speaks volumes to the failure of this production’s overreach in trying to depict centuries of what is basically the parallel fight for freedom through the centuries in both Poland and America.