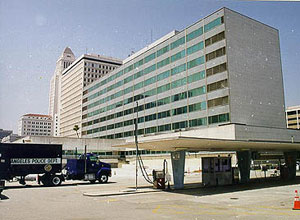 Parker Center’s date with the wrecking ball was given a temporary reprieve Wednesday after a vote on its fate was postponed due to a clerical error.

An environmental impact report calling for the demolition of the former headquarters of the Los Angeles Police Department was scheduled to be voted on by the City Council Wednesday, but a clerical error in how the motion was filed caused it to be removed from the agenda, according to Rick Coca, a spokesman for City Councilman Jose Huizar.

The Entertainment and Facilities Committee approved the plan Tuesday, and also simultaneously approved a larger master plan for the Civic Center that would construct 1.2 million square feet of new office space, mostly through developments proposed for the Parker Center site and the nearby Los Angeles mall, a retail area below street level.

Coca told City News Service there will be an effort to get the item on Friday’s City Council agenda. He also said that if the EIR is approved, it essentially seals Parker Center’s fate and it will be a question of when — not if — it will be demolished.

Huizar, whose 14th Council District includes the Civic Center area and who also chairs the Planning and Land Use Management Committee, cited the building’s ties to the department’s history of racial discrimination as a primary reason he voted against the designation.

A second office tower on the site of the Los Angeles mall would also be constructed under the master plan , and the James K. Hahn City Hall East Building would eventually be demolished and replaced with a public courtyard.

City Hall East is across the street from City Hall, and the two buildings are connected by a walkway over Main Street. The Los Angeles City Attorney’s offices and other city employees work there.

Coca said there is no estimated cost yet for the master plan, and the cost of the Parker Center demolition along with the new civic tower in its place is still up for debate, as is how it would be financed.

Under the master plan, Parker Center would be replaced first, with demolition coming as soon as this year, while City Hall East would not be demolished until as late as 2032.

The creation of the courtyard space would help open up City Hall to the surrounding communities, including Little Tokyo. The city seized the land that Parker Center was built on in the 1950s through eminent domain, and some members of the Little Tokyo community have been bitter about the seizure ever since as it took away a key center of the neighborhood.

“The Civic Center Master Plan provides an exciting blueprint that will open up City Hall and the Civic Center to increased public interaction through paseos and open space intermingled with multi-use city towers that will provide ample space to more efficiently do the city’s business, while also providing for other uses, such as retail, residential and restaurants,” Huizar said. “A major goal of the Civic Center Master Plan will also allow us to reconnect our city’s center with neighboring communities, such as Little Tokyo, El Pueblo, the Historic Core, Chinatown, the Arts District and our city’s central business districts.”