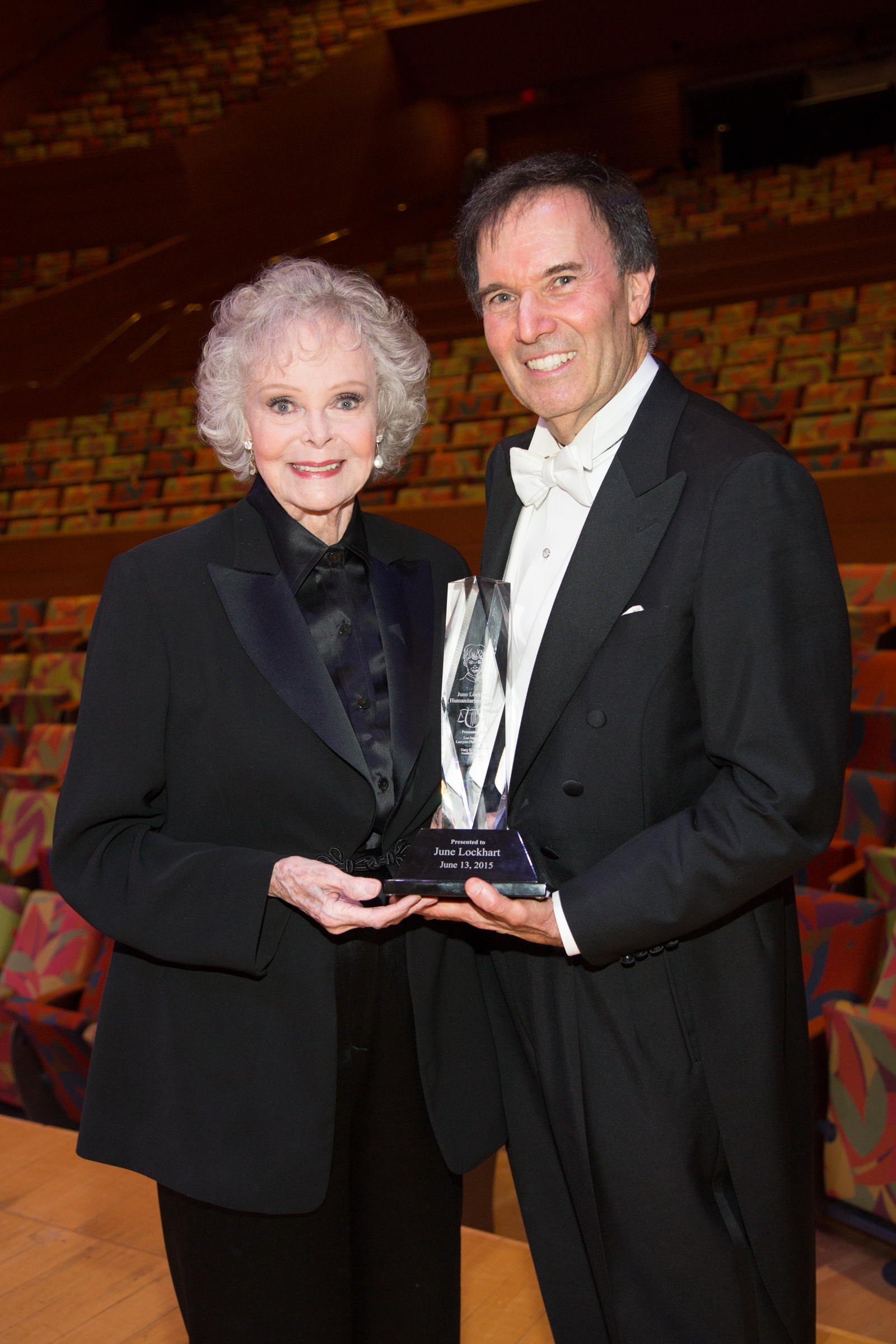 Santa Monica Resident, June Lockhart, who has been dubbed the “Band Chick,” by THE BIG BAND of BARRISTERS, will be celebrating her 90th birthday at a special Big Band concert sponsored by Beverly Hills on June 25th, at Beverly Canon Gardens (241 N. Canon Drive, Beverly Hills – Next to Montage Hotel).

Composed of lawyers, judges, law students and legal staff, the Barristers perform music from the Golden Era of big bands. The band has already won many awards, including the “Battle of the bands,” nation-wide competition in Chicago.

June made her professional debut at age eight and her screen debut in MGM’s version of A Christmas Carol, followed by her Broadway debut “For Love or Money,” winning the Tony (known then as The Antoinette Perry Award) in the category of “Best Debut.”  The overnight toast of Broadway, then went on to become one of TV’s most recognizable moms, co-starring in popular series like “Lassie,” “Lost in Space” (now celebrating its 50th anniversary) and “Petticoat Junction.” One of June’s earliest television memories, was her first appearance on “Kukla, Fran and Ollie,” in 1953. June fondly recalls one of her favorite TV mom roles (and her first as a grandmother) as Maria Ramirez on the daytime drama, “General Hospital” and June recently appeared in Vanity Fairs TV Mini Short representing TV in the 60’s. Included among her other 130+ television credits are Grey’s Anatomy, Guns Smoke, The Drew Carey Show, Beverly Hills 90210, Murder She Wrote, Quincy, Falcon Crest, The Colbys, Roseanne, etc. There are currently five stars on the Hollywood Walk of Fame for the Lockhart family, June was included among the first legendary ladies of stage and screen to have her career inducted into the Smithsonian Institution’s first permanent “Entertainment Exhibit,” and late last year, the National Aeronautics Space Administration (NASA) presented June with their Exceptional Public Achievement Medal.

In addition, there’s the Tony, the Oscar, the Emmy, The Grammy and now June Lockhart received the first, of what will be an annual humanitarian presentation, “Junie” award from Gary Greene esquire of the LA Lawyers Philharmonic at Disney Concert Hall on Saturday nights engagement, which featured everything from Rhapsody in Blue to a “Salute To Broadway Musicals,” highlighting show-stopping Broadway songs from The Sound of Music, Westside Story, My Fair Lady, Guys and Dolls, South Pacific, A Chorus Line, Phantom of the Opera, Les Misérables and Wicked. 25% of the ticket proceeds to benefit those in need, who cannot afford legal services