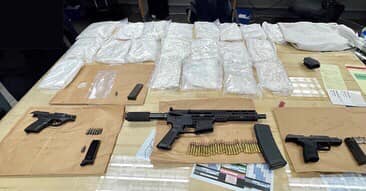 According to the Culver City Police Department (CCPD), on March 9 around 7:30 p.m., officers conducted a traffic stop on a vehicle in the area of Slauson Avenue and Buckingham Parkway.

CCPD says after contacting the two occupants, officers developed cause to search the vehicle. Inside the vehicle officers located a loaded and illegally possessed assault rifle, two loaded handguns and a pproximately 21 pounds of methamphetamine.

The two occupants were placed under arrest for possession of a controlled substance while armed. According to police, officers then responded to a Culver City hotel, located at 6161 W. Centinela Avenue, where the occupants of the vehicle were staying.

After obtaining a search warrant, a search of the room was executed which yielded an additional 61 lbs. of methamphetamine.