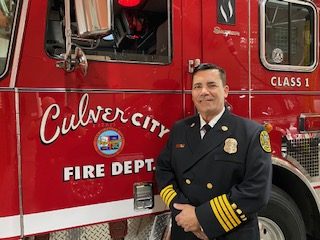 The City Council of Culver City has announced the appointment of Kenneth Powell as Culver City’s next Fire Chief.

Chief Powell began his career with the City of Culver City fire service in 1993 as a reserve/volunteer firefighter. Since that time, he has served as a Firefighter, Paramedic, Fire Captain, and Battalion Chief. In 2018, he was appointed as the Assistant Fire Chief and in that capacity was responsible for Fire Suppression, Emergency Medical Services (EMS), Telecommunications and Emergency Preparedness. Most recently, since April 2020, he has been acting Fire Chief.

Chief Powell holds a Bachelor of Science Degree in Fire Administration and Technology from California State University, Los Angeles and is a State certified Chief Officer, as well as a County and State certified Paramedic. He was also recently nominated to serve on the Los Angeles County EMS Commission Board to represent the Los Angeles Area Fire Chiefs Association, an association composed of thirty fire agencies.

“I appreciate the opportunity to continue to serve the Culver City community. I have felt so fortunate to have had the opportunity to work for this fire department, in this City. It was a dream of mine to be hired here—the place where I grew up—throughout my years of testing with many different agencies. I am extremely grateful that my dream came true. I have always appreciated the opportunity I was given and have never taken it for granted. To have the chance to lead this department moving forward is the opportunity of a lifetime,” said Chief Powell.

“Chief Powell has done an excellent job of leading the Fire Department during the past few months despite numerous challenges, such as the ongoing coronavirus pandemic and mutual aid deployments of our fire fighters to wildfires throughout California. He is a thoughtful, dedicated public servant who will lead with integrity and keep Culver City safe,” said Mayor Göran Eriksson.

Chief Powell will assume his new role on August 31, 2020. He replaces Chief David L. White, who is retiring after serving the past six years as Fire Chief.

From the City of Culver City