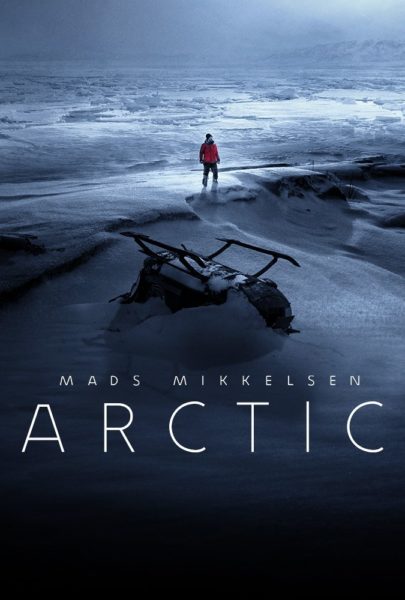 “Arctic,” a beautifully shot Cast Away-esque film, is a harrowing tale about a man (Mads Mikkelsen) who survives his plane crashing in the snowy wilderness.  No flashback is given as to what led to the crash and the man is given no backstory, yet it is with a visceral reaction that we root for his survival as he faces the increasingly unforgiving elements in the icy tundra.  The man takes refuge in his plane and fishes out of the ice on a daily basis to nourish himself while relying on a signal to let him know of any sign of life nearby or in the distance.

His will to survive intensifies when he encounters a woman whose search and rescue helicopter crashes before his eyes.  He saves her from the wreckage (but is unable to save her fellow passenger) and immediately becomes her caretaker and tends to her wounds, as she desperately clings to life, and in the process forms a bond with her.  In a moving scene, he tenderly hugs the woman who, simply by her presence, seems to be saving him from his loneliness and despair.

One day he makes the difficult decision to leave his plane behind and head out looking for rescue, knowing that doing so though, poses its own dire risks.  He attaches the woman to a sled and pulls her along with him on their arduous trek.  As the narrative unfolds, the viewer becomes immersed in the harshness of the environment and the toll that it is taking on these two plane crash survivors.  With each passing day, the urgency of their predicament becomes more dire.  The man’s resourcefulness is able to help sustain them along the way.  The film’s docudrama feel is thankfully free of any artifice and has a very minimalist style to it.  We are presented with the dilemma of what we would do in such a bleak situation and reminded of how things can change in an instant.

Mikkelsen, a Danish actor, gives a quiet yet grueling, physically demanding performance that is reliant on much non-verbal interaction.  He single-handedly carries the film and never lets the viewer’s attention span lag.

Despite the bleakness, the movie is worth enduring for its look at the human condition at its most extreme.