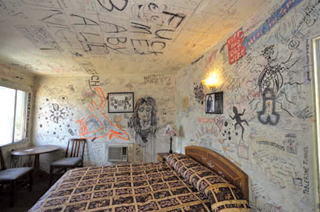 WeHo World, By Keldine Hull| When I first came to West Hollywood, everything was brand new; I felt like Dorothy in Oz, technicolor and all. From La Brea to Doheny, Beverly to Sunset, West Hollywood was this magical place where I could experience something new every night of the week. Twelve years, eight jobs, and four apartments later, WeHo is still as magical as it ever was. Being the seasoned Angeleno that I am, however, makes it harder to find things that still feel brand new. This article is dedicated to anyone who’s “been there, done that” and seen pretty much everything that West Hollywood has to offer. There’s one thing that I truly appreciate about this city: Even after living here for over a decade, it still manages to surprise me.

The Alta Cienega may look like your average Los Angeles motel, complete with décor circa 1980, comfortable beds, and working A/C units. Tucked away between La Cienega and Halloway, the unassuming, run-of-the-mill motel is home to an iconic piece of rock and roll history.

Jim Morrison was the undeniably charismatic front man of the Doors known as much for his stage presence as his sex appeal. The Doors spent many a wild night along the Sunset Strip, performing at the Whisky A Go Go as the house band after it opened in 1964. Morrison was a regular at places like Barney’s Beanery, where a plaque marks his favorite seat by the bar, and the Alta Cienega Motel. From 1968 to 1970, room 32 was Morrison’s oasis in the heart of West Hollywood and his pad of preference when he found himself banished from the apartment he shared with his girlfriend.  After Morrison’s death in 1971, room 32 became a shrine where fans from all corners of the Earth could visit and commemorate a legend. Every square inch of the historic room is filled with messages and drawings, a tribute in the form of graffiti to one of the most memorable lead singers of all time. A night spent in the famous room 32 will cost you anywhere from $70 to $160, but who can put a price tag on sleeping in the same exact room where the Lizard King himself slept?

While most people are familiar with Sunset Boulevard’s world famous Roxy, not as many people know about the hidden lounge located directly above the Roxy. On the Rox began as a private hideaway for Jack Nicholson and Grammy award-winning record producer and founder Lou Adler. Overtime legends like Elton John and John Lennon found their way above the raucous of the Roxy, which became an unofficial clubhouse for Adler’s sons, Nic and Cisco.

On the Rox gives you all the nostalgic feels like you’ve literally taken a step back in time, yet it remains relevant by featuring fresh, up and coming artists who have yet to make their rounds on the Strip. It’s like the off Broadway of Sunset; you still get to see great talent.

There was a small part of me that didn’t want to mention Blue Heights, located just off Sunset Plaza, out of pure selfishness. Being that this is an article about hidden gems, it would be remiss of me to not write about one of West Hollywood’s best-kept secrets (in my humble opinion). It’s not a lounge or famous hotel room. It doesn’t charge a cover or make you wait in line. It’s one of the most picturesque vantage points in West Hollywood where you can see nearly every major city in the surrounding area, from Downtown to Culver City. It’s peaceful, secluded, and absolutely breathtaking. The city is overwhelming at times; with so much going on around you, it’s easy to get lost. In the movie “Love Happens,” Aaron Eckhart takes a group of people to the top of a building overlooking the chaotic city below. He tells them, “Inside of each of you, there are sirens, honking horns, and gridlock. But there’s also this. We just have to do the work and find it.”

West Hollywood is full of surprises; you just have to take the time and find them.