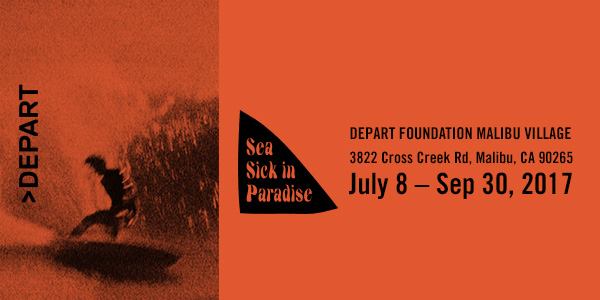 The DEPART Foundation and the City of Malibu are hosting a media preview of “Sea Sick in Paradise,” a summer group exhibition featuring the work of 46 artists, on Friday, July 7, 11:00 AM at Malibu Village in Malibu.

Sea Sick in Paradise, on display July 8 through September 30, 2017 at DEPART gallery in Malibu Village, is curated by Amy Yao, featuring works in a variety of media by 46 established and emerging artists, many of whom are surfers or are inspired by surfing, the ocean, and coastal culture.

DEPART Foundation is a non-profit organization founded in Italy in 2008, with a gallery in West Hollywood, dedicated to the discussion, exhibition and promotion of art, with a focus on the development and support of contemporary, emerging artists. DEPART organized Sea Sick in Paradise in collaboration with the Laboratory for Environmental Narrative Strategies at UCLA (LENS) and the Surfrider Foundation. The exhibition explores the longstanding relationship between surfing and art making, particularly highlighting work made in Southern California.

With an emphasis on diversity and environmental concern, the exhibition traces evolving surf culture in the
21st century through a variety of vantage points. The multiplicity of work, artists and surfers in the exhibition strives to demonstrate the divergence of experience, concerns, identity, culture, and generation, attesting to the draw of the ocean.