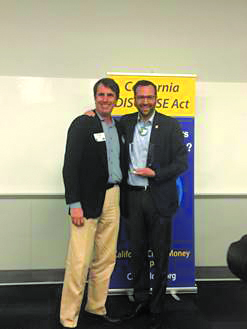 Senator Ben Allen (D – Santa Monica) was honored as Clean Money Champion by the California Clean Money Campaign Sunday. The award is presented to the California State legislator with the highest “Clean Money Score,” as determined by their leadership, votes, and actions regarding campaign finance reform. The award is based on the organization’s scorecard which seeks to highlight legislators who are the “strongest advocates for the Big Idea that regular voters should have more information and power in elections.”

Trent Lange, President of the California Clean Money Action Fund, presented the award to Senator Allen on Sunday, March 12th, at the kickoff rally for the California DISCLOSE Act. The DISCLOSE Act (AB 14- Gomez/Levine) will increase the transparency of political advertisements by requiring all ballot initiative committees and political action committees supporting or opposing candidates to display their top three true funders. Senator Allen is a principal co-author of the bill and of its past iteration, AB 700.

“We’ve just gone through an election that showed we need transparency and disclosure more than ever, which is why I’m optimistic the California DISCLOSE Act will be successful this year,” said Senator Ben Allen.

As the chair of the Senate Elections Committee during the 2015-2016 legislative session, Senator Allen led important election reforms including the repeal of the prohibition on public campaign financing (SB 1107- Allen) and the Overturn Citizens United Act (SB 254- Allen,) which became the successful 2016 state ballot initiative, Proposition 59.

This legislative session, Senator Allen has authored the Petition Disclose Act (SB 651- Allen) which will require initiative petitions circulated by paid signature gatherers to clearly display their top three funders of $50,000 or more.

“Every election season, voters are bombarded with requests to sign initiative petitions by paid signature gatherers who aren’t required to disclose or even know who’s paying for the initiatives they’ve been hired to qualify. SB 651 will make sure voters know who’s behind the initiatives they’re being asked to help put on the ballot,” said Senator Allen.