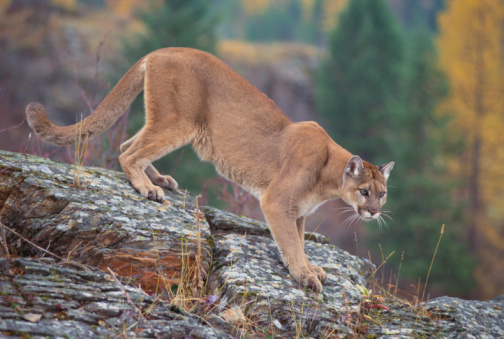 P-22, a mountain lion that has been fitted with a GPS collar and has been living in the Santa Monica Mountains and Hollywood Hills for the past several years, today surreptitiously vacated a crawl space at a Los Feliz home where he’d been holed up since at least Monday.

“P-22 is gone, and it’s a happy ending,” Janice Mackey of the California Department of Fish and Wildlife told Fox11 about 9:30 a.m. “It’s exactly what we wanted; we wanted the cat to leave on his own.”

The cat was discovered Monday by home security technicians who saw him while installing equipment in the residence, according to Jason Archinaco, who owns the four-story home below the Greek Theatre with his wife. It was unclear how long P-22 had been there.

City animal control officials called state wildlife officials for assistance, and they used a variety of measures, including a tennis ball launcher, in an attempt to coax the big cat out of the crawl space, without success.

This morning, DFG personnel using an electronic device swept the area for any sign of the animal, and  determined that he was gone. The home has been under renovation, and the cat went into the crawl space and got comfortable, Mackey said.

“He had access, which was a huge thing,” Mackey said. “Now, we blocked his access, so if he does come back, he won’t be able to get in there.”

The animal, which was recently treated for poisoning and mange, weighs at least 150 pounds, according to Archinaco.

P-22 was given a collar about a year ago and has grown in that time, a Griffith Park ranger told NBC4.