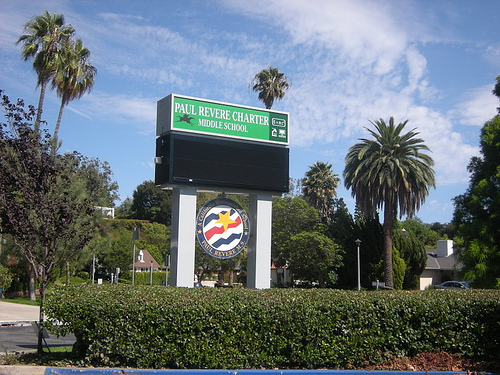 Los Angeles Unified is being sued on behalf of a mixed-race student whose teacher allegedly made racially charged remarks in class, including using the “N-word” and saying the young man shot by a police officer in Ferguson, Missouri, “got what he deserved.”

Court papers show the complaint was filed by a parent identified only as Shawn B. for the benefit of his daughter, Maggie B., a student at Paul Revere Charter Middle School and Magnet Center in Brentwood.

The suit alleges civil rights violations and seeks unspecified damages as well as a court order directing that the LAUSD provide accommodations to students “free from prohibited discrimination.”

An LAUSD representative said the district has “no comment on the complaint, which we are still reviewing. District policy is adamant that all students are to be treated with respect. The safety of students is L.A. Unified’s highest priority.”

The plaintiff is under 18 and is half black and half white, according to the suit filed Wednesday in Los Angeles Superior Court. She started attending Paul Revere School in 2013 as a seventh-grade student and selected the campus because of its racial and socioeconomic diversity, according to the complaint.

Early this year, the girl was assigned to an eighth-grade history class taught by Steven Carnine, the suit says. On Jan. 16, the day after the birthday of slain civil rights leader Martin Luther King, Carnine handed out a questionnaire that asked about racial stereotypes, according to the plaintiff.

During the ensuing discussion, Carnine brought up the shooting of Michael Brown by former Ferguson police Officer Darren Wilson, the lawsuit states.

“In discussing the incident, Carnine said that the guy was a thug and he got what he deserved,” according to the suit, which alleges that the teacher also said, “Black people are judged for not being smart because they are not smart. A lot of them are just athletes.”

Carnine went on to say that if he was walking alone at night and there were two black men behind him, he was “immediately going to be scared and think they are either going to steal from me or hurt me,” the lawsuit alleges.

The teacher also allegedly said, “We all know Jews like to hoard their money.”

Carnine made the remarks while looking directly at the plaintiff and the one other black student in the class of about 30 pupils, the suit alleges.

Maggie, whose family was involved in the civil rights movement, became “intensely uncomfortable and uneasy by these comments,” the suit states.

The girl’s father complained to the school principal, Christopher Perdigao, who replied that Carnine was “old school” and that the best way to solve the issue was to try and meet with him, the suit alleges.

However, that same day, Carnine, during a lecture on the Civil War, stated that “people didn’t like Lincoln because he was a (N-word) lover,” the complaint alleges. Carnine was “staring and smirking” at the plaintiff when he made the remark, according to the suit.

The girl’s father returned to the school with her mother and godmother to speak with school officials to protest the latest alleged remarks. Assistant Principal Thomas Iannucci, while saying he would investigate Carnine’s alleged comments, also was dismissive of the complaints and said “there is no need to go to the press,” according to the suit.

The girl now fears for her safety at school and Iannucci has not told her or her family what occurred during the investigation into Carnine’s alleged remarks, according to the lawsuit, which alleges she has been “subjected to glares and hostile stares” from Carnine and Iannucci.

“Plaintiff has also suffered from sleep problems and anxiety since these incidents arose,” the suit states.