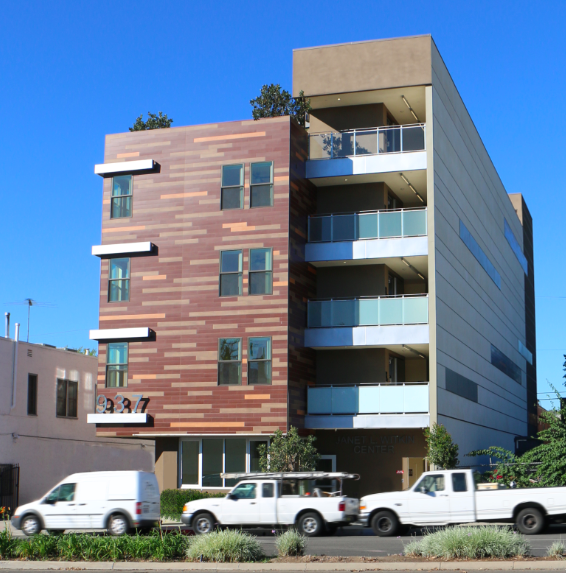 Developed by Affordable Living for the Aging (ALA), the project will serve a growing segment of the local low-income and formerly homeless senior population.

“Five years in the making, we are celebrating the fruition of ALA’s founder Janet L. Witkin’s lifelong mission of finding homes for seniors. The Janet L. Witkin Center will provide low-income and formerly homeless seniors with safe, stable housing that preserves their dignity and independence,” said ALA president David Grunwald.

Yaroslavsky said the development was a building to be proud of in every way.

“The handsome exterior design creates a striking focal point on Fairfax Ave., enhancing and enlivening this major thoroughfare,” Yaroslavsky said. “The project also enriches our community by providing a supportive living environment for some of our most vulnerable citizens.”

Designed by Killefer Flammang Architects (KFA), the five-story contemporary building is clad in warm tone porcelain tiles that wrap around the building horizontally while metal panels form the vertical element. The design integrates universal and green design elements that will provide a socially and environmentally sustainable home environment.

Laura Highcove, architect at Killefer Flammang, notes, “I am so proud to be a part of this exciting project. The building is beautiful, and we’re all looking forward to welcoming residents into their new homes.”

The project features a courtyard, open walkway and the units are oriented to the south to receive natural light, noted KFA design principal Wade Killefer.

“A very small site was a major challenge,” added Killefer.

To integrate the project with the community, a “front porch” patio links the building with a direct connection to the street, added Lise Bornstein, KFA project manager. “Integrating social and community spaces was a key goal,” she said.

The one-bedroom apartments are designed to encourage resident awareness and interaction with immediate neighbors, she said. Interior features include accessible and adaptable kitchens and bathrooms.

Another element, which encourages social interaction, is the 5th floor community garden, where tenants will learn how to manage a year-round garden.

Considerable emphasis also was placed on way-finding–a major consideration for elderly people. “This was accomplished through use of unique accent colors and materials on different floors, thereby providing recognizable visual and tactile cues to assist in orientation,” the architect said.