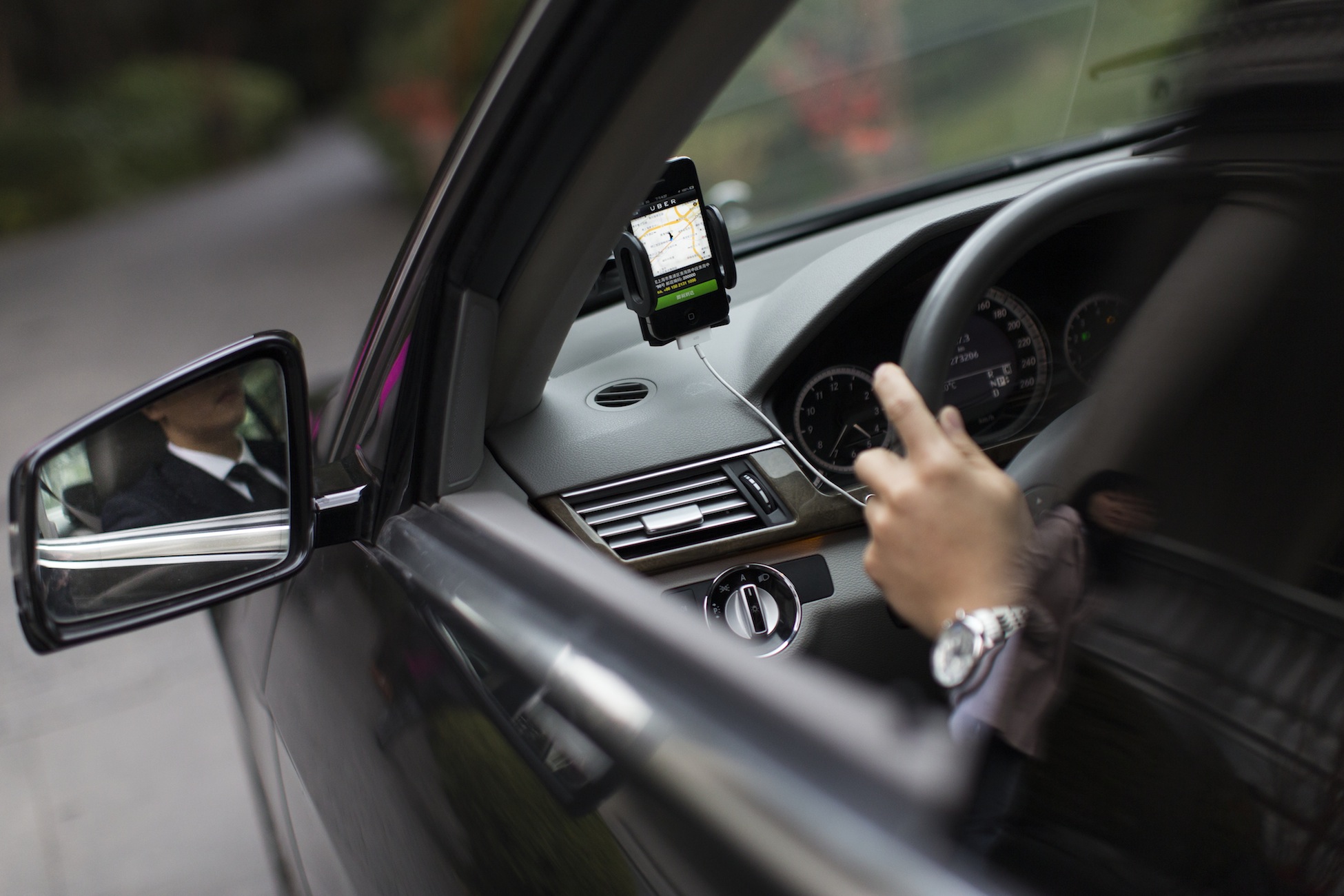 Mobile application-based transportation companies that gained popularity as an alternate form of getting around town have been subject to more than a few bumps in the road recently. On June 10, Los Angeles councilman Paul Koretz, who represents portions of the Westside, joined more than 100 taxi drivers in protesting ride-sharing services such as Uber, Lyft, and Sidecar outside Los Angeles City Hall. On June 24, more than 100 Uber drivers, mostly of the black car kind, protested in front of the Uber Technology offices in Santa Monica regarding issues of unethical treatment and lack of communication.

During the downtown Los Angeles protest, a united front of taxi drivers wore red t-shirts with three words in white lettering and all capitals: “Unregulated,” “Unsafe,” and “Unacceptable.” Beneath those three words was the Uber logo.

Over in Santa Monica, questions of regulation and insurance were abounding in the late June rally.

According to Los Angeles councilman Mike Bonin, who also represents much of the Westside, the issue of regulating Uber’s operation and mandating certain insurance requirements above and beyond what the law already requires were necessary elements for the ride-share company to maintain a regular existence in the region.

Meanwhile, two proposed state laws are pending a vote in Sacramento, both of which could directly impact the ride-share industry if ultimately approved and signed into law.

Politics aside, Santa Monica-based MetroCab general manager Shirley Pe said she believed Uber’s major flaw was its apparent lack of accountability. To those not following the finer details of the transportation industry, the topic of accountability might seem a bit elusive.

Uber appears to be the language of younger generations with the convenience and familiarity of its technology platform. To add a point of reference, local taxi companies in Santa Monica have reported losing 30 to 40 percent of their business once apps like Uber and Lyft came online and became a popular mode of transportation.

Yet, one of the most prominent issues at hand is whether the overall standard Uber upholds for its drivers are, as currently being criticized, too low or not strict enough.

The conditions of an Uber driver’s insurance has a direct impact on public safety, so it is no wonder that this matter has become the topic of a proposed bill in Sacramento.

Currently, Uber drivers are only insured under the company’s plan while there is a customer in the vehicle, which those who are protesting the ride-share company claim presents a danger to pedestrians and other vehicles on the road if there is no client in the back seat.

The signs held by the protestors at the Uber demonstration in Santa Monica two weeks ago read messages that demanded UberX and UberXL “show [their] insurance” and told UberX and UberXL drivers to “not be fooled,” as they are “not fully covered,” citing the death of Sophia Liu as “the best example.”

On New Year’s Eve 2013, Liu, a six-year-old girl, was reportedly crossing a street in San Francisco’s Tenderloin district when she was struck and killed by Honda Pilot. According to news reports, the person behind the wheel of the SUV was allegedly an Uber driver.

Liu’s death led some to question Uber’s policy when it comes to insuring its drivers.

Eva Behrend of the Uber’s communications department said that the company’s partners have “one million dollars of coverage for driver liability” from the minute an Uber driver accepts a trip request to the completion of the ride, “regardless of whether the driver’s personal insurance applies to the trip.”

Ayman Radwan, CEO of Taxi! Taxi! in Santa Monica, offered his insights. As someone who has been involved with Taxi! Taxi! since 2005, Radwan has witnessed the changes that the transportation industry has undergone after apps like Uber came into play.

“Uber is hiding behind the technology platform,” Radwan said.

He went on to explain that Uber drivers do not undergo the same standard of fingerprinting tests or background checks as taxi drivers. Local taxi companies are required to take the examinations issued by the Department of Justice and are ultimately approved or denied by the City of Santa Monica.

On the other hand, Uber’s website claims that its background checking standards are “often more rigorous than what is required to become a taxi driver.”

Behrand said “all Uber driver partners must go through a rigorous background check that leads the industry [and] has set a new standard.”

The check is comprised of a three-step screening that Uber has developed for its prospective drivers, which includes county, federal, and multi-state checks. The checks go back seven years, which is the maximum amount of years allowable by California law.

In addition, Radwan explained that taxi companies go through an inspection by the Dept. of Weight and Measure in order to get their meters approved for public use.

“If UberX and UberBlack develop their own meter rates, who makes sure that the rate is accurate for the public?” Radwan said.

Uber’s fares can be found on its official website.

Still, some of those who are protesting Uber claim they only seek to reform the ride-share company in hopes it can continue to serve as efficient employees.

Limousine company owner Lotfi Benyedder doubles as an UberBlack driver. Benyedder was also an outspoken protestor at the Uber demonstration in Santa Monica. However, he clarified that he simply wants to reform Uber.

“We’re not trying to stop Uber,” Benyedder said. “We love the technology; it’s beautiful. But we have concerns about its regulations and need to make sure that everybody out there is protected.”

MetroCab Santa Monica and Taxi! Taxi! in Santa Monica also stated that they do not mind competition and innovation, as long as they exist on fair grounds.

Councilman Bonin, who represents areas such as Brentwood, Venice, Mar Vista, Westchester, and the LAX area, said he hoped companies like Uber served the whole of Los Angeles, not just the City’s affluent areas.

He also told Westside Today greater oversight of Uber, Lyft, and Sidecar was still in the works with the California Public Utilities Commission (PUC).

“The PUC is still trying to work their way through how to regulate, and they’ve been having informational workshops with various jurisdictions, including City of L.A.,” Bonin told Westside Today. “The feedback we as a city has been providing to them has been [about] … the insurance and background checks.”

Councilman Koretz, who represents Century City, Bel Air, Beverlywood, and Cheviot Hills among other areas, called on lawmakers at the June 10 City Hall demonstration to adopt Assembly Bill 612, a state bill that would require rideshare services to comply with the same regulations now imposed on taxis.

Koretz, who introduced a resolution in council to support the bill, said that without such regulation, “these ridesharing services should not be allowed to operate on our streets.”

Koretz said regulation recently adopted by the State’s Public Utilities Commission for the services are “watered-down” and enforcement is lax. Recent media reports indicate background checks were unable to turn up the criminal records of some Uber drivers, he said.

Earlier this year, Los Angeles Mayor Eric Garcetti told Westside Today he was a supporter of the ride-sharing apps.

He said Uber, Lyft, and Sidecar are important to the Los Angeles economy.

“The taxi industry should have the same tools at their disposal,” he said. “I want to see all of them compete vigorously with good tools, making our lives easier and improving customer service. I just want to make sure that nobody is unfairly treated.”