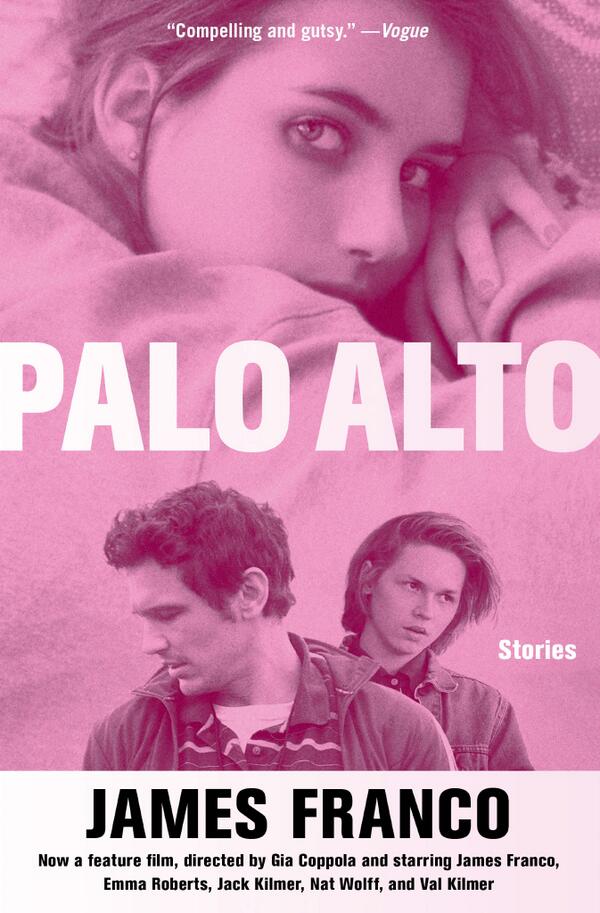 The movie “Palo Alto” is based on the book “Palo Alto: Stories” by James Franco.  It stars Emma Roberts as April, Nat Wolff as Fred, Jack Kilmer as Teddy, and James Franco as Mr. B, and is a dark coming-of-age film about troubled adolescents.

The movie is supposed to take place in the city of Palo Alto (although the city itself is never explicitly referenced) and shows teens partying and behaving recklessly a lot.

I liked that the movie tried to be realistic – the actors actually looked like teens and what they were going through didn’t feel overly contrived.  Teddy comes across as indifferent, while his friend Fred (definitely a weakness in the movie) was obnoxious and not the least bit appealing.

Fred is without question a bad influence on Teddy.  A scene where Fred and Teddy are chopping down a tree with a chainsaw and Fred is laughing, a scene where Fred rams his parked car into a wall for no apparent reason and finds it funny, and a scene where Fred (with Teddy) purposely drives his car the wrong way on the freeway were all maddening.

Near the end of the movie, we see that Fred (obviously a disturbed individual) might have some kind of issue with his sexuality.  Fred’s father it seems might have something to do with this.

Because of an alcohol related incident, Teddy must perform community service as part of his punishment.

Things seem to be going well until Fred shows up one day at his place of work.

Fred and Teddy seem to be very dependent on one another.  Even though in his heart Teddy knows that spending time with Fred isn’t good for him, he continues to do so, probably because Fred is his only friend.

Teddy, a loner type, sees in Fred a confident, assertive, outgoing guy, yet those qualities from Teddy’s viewpoint seem to be overshadowed by Fred’s over-the-top behavior.

April on the other hand is a shy, sensitive girl who is a star soccer player.  The girl’s soccer team is coached by Mr. B, who has an inappropriate fixation on her, while she has a crush on him. On a regular basis she babysits for her coach. April is probably the film’s most sympathetic and intelligent character.

Franco is effectively creepy as the soccer coach.  What makes the performance work well is that he is subtle with some of his unwholesome intentions and he comes across believable in the role.

The movie’s depiction of teens is a bit depressing as the teens don’t seem to find much joy in what they do. I don’t think that this is a flaw in the movie, just something I’m used to seeing in movies about adolescents.

I found the ending to be too arbitrary.  Overall, the movie wasn’t as good as I had hoped, but still a worthy enough addition to the coming-of-age genre.