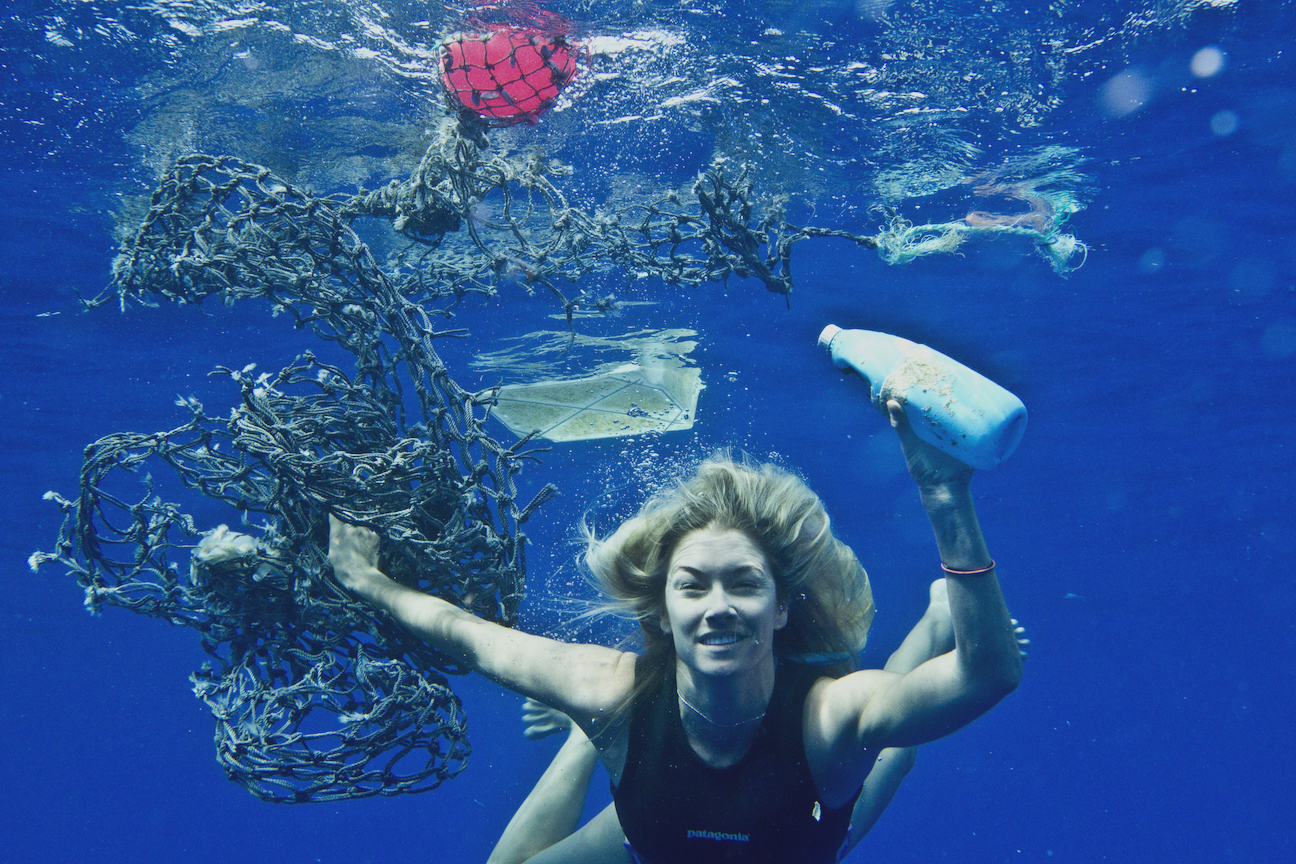 Even then, audiences couldn’t have imagined what a prophecy that was. Plastics, designed for short-term use and originally marketed to the 1950s housewife as a panacea for dishwashing, paradoxically last indefinitely. Today, about 300 million tons of plastic are produced globally each year, and only about 10 percent of that is recycled. Of the plastic simply trashed, about a quarter million tons ends up in the sea is floating in the sea.

But the accumulation of plastic waste doesn’t exist in the Great Pacific garbage patch or garbage zoo we’ve come to believe – it’s something more insidious.

“The best name for it is a plastic smog,” said Marcus Eriksen, lead author on a paper published earlier this year in the Plos One journal that served as the fist estimate of how much trash and plastic is floating in the world’s oceans. Eriksen is co-founder of the Santa Monica-based nonprofit 5 Gyres, along with his co-founder wife Anna Cummins.

About 92 percent of the 5.25 trillion particles of plastic in the sea are the size of a grain of rice or smaller, Eriksen said, and “what happens when trash gets near coastlines, on every coastline worldwide, sunlight or fish will reduce a plastic object to confetti very quickly.”

But the worst offender of plastic waste in the water doesn’t come from the bottles, six-pack rings, or bags. The biggest problem is actually the tiniest product: microbeads, found in face wash, body scrub, moisturizer, and toothpaste.

These perfectly spherical plastic balls are flushed into U.S. waters at a rate of roughly 38 tons annually, according to Cummins. What’s worse is that they’re too small to be recovered through most wastewater treatment plants but just small enough to get ingested by fish, including those species that humans harvest for food.

For the past five years, they’ve used information based off annual worldwide expeditions to populate a global model of trash in the ocean. During these research trips on the sea, dragging a fine net behind the boat for a few miles, and they discovered a confetti of small plastic particles dominating every sample.

To quantify the presence of plastics even more, Cummins and Eriksen later sailed throughout the Great Lakes. They found the highest level of plastic yet of any ocean sample survey in anywhere in the world.

“One sample contained roughly 1,200 particles of plastic,” Cummins said. “In Lake Erie, we were able to trace these plastic particles back to companies and a specific product, and it’s something that many of you have in our own bathrooms at home.”

For example, one single tube of Johnson & Johnson’s Clean & Clear exfoliant contains about 350,000 of these polyethylene or polypropylene microbeads. Microbeads in scrubs and toothpastes wash down the drain but aren’t actually being captured by sewage treatment. They pass into rivers, lakes, and ultimately oceans, where they then threaten marine ecosystems via the food web.

5 Gyres has documented roughly 633 species of fish impacted by plastic waste, including being found in the circulatory systems of muscles and clams and even plankton.

“What we know about plastic and the way it behaves in the ocean is also where it becomes a potential human health threat,” Cummins said.

These small particles of plastic act as sponges for toxins such as DDT, PCBs, and other industrial chemicals, Cummins said. And because fish ingest these particles and absorb the toxins in their flesh, these contaminants can eventually make their way up the top of the food chain to humans. Cummins took this concern further when she tested her own blood and found trace levels of PCBs, DDT (all of which have been banned since the 1970s), PFCs, and flame-retardants.

“These are parts per million, parts per trillion in some cases so it’s not to say the chemical load we carry is going to have impacts on us today or tomorrow, but what’s to say for the next generation and the next?” she said.

The only solution for now is to stop the micro-particles at the source, since cleaning the oceans would be impossible. When 5 Gyres took their published findings to Proctor & Gamble, Johnson & Johnson, L’Oreal, the corporations agreed to slowly start phasing out the microbead products.

“But we wanted to take it one step further because we are far too small of an NGO to hold major multi-national corporations accountable,” Cummins said. “So we drafted a bill.”

They helped Assemblymember Richard Bloom (D-Santa Monica) author AB 888, which would set up the strongest protections in the country against the use of these unnecessary and toxic additives. California’s proposed ban is unique in that is prevents the use of both synthetic plastic microbeads and the biodegradable alternatives some companies are developing.

“There are bans in other states as well, but California being as big as we are will probably drive most of the thing,” Bloom said of the national impact of AB 888.

Connecticut, Maine, Colorado, Indiana, Maryland, Illinois, New Jersey, and Wisconsin have all ready passed legislation that prohibits the sale and manufacturing of microbeads; Minnesota, Washington, Oregon, and Hawaii are also considering legislation to phase out microbeads.

Though the initial vote on the California bill to ban microbeads fell one short of the 21 majority to pass the state senate in 2014, the bill passed the state assembly again this year and will come to a vote in the senate later this month before going to Gov. Jerry Brown for his consideration.

product containing intentionally added plastic microbeads that are used to exfoliate or cleanse in a rinse-off product.

Visit www.5gyres.org/banthebead or download the Beat the Microbead app for more information about the harm of microbeads on the humans and the marine environment.