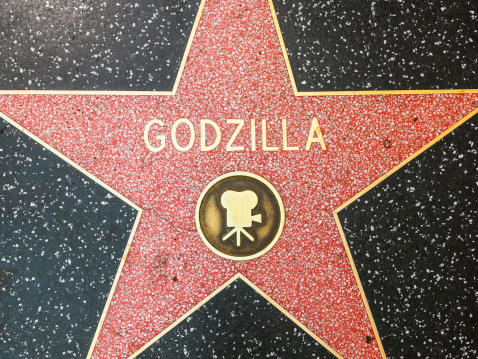 The Japanese movie studio that owns the rights to Godzilla is suing the makers of a yet-to-be-made film, alleging the image of the giant lizard was used in publicity material without permission.

Toho Co. contends in the copyright infringement complaint, filed Tuesday in Los Angeles federal court, that Voltage Pictures does not have authorization to reference the amphibious reptilian monster in marketing materials for its forthcoming film, “Colossal.”

The Los Angeles company, whose past films include the Oscar winner “The Hurt Locker,” did not immediately respond to a request for comment.

“Colossal,” which has not been shot yet but was announced last week at the Cannes Film Festival, will  star Anne Hathaway as a woman who hears reports of a giant lizard attacking Tokyo, and believes she has a psychic connection to the creature. The script has been described as “Godzilla meets Being John Malkovich.”

The lawsuit alleges that “blatant infringement of another’s intellectual property is wrong enough. That defendants, who are known for zealously protecting their own copyrights, would do so is outrageous in the extreme.”

Toho launched Godzilla with its 1954 classic film, and licenses the character for video games, and such remakes as last year’s “Godzilla,” directed by Gareth Edwards.

The lawsuit contends Voltage sent an email blast to potential investors, sales agents and distributors on May 9 pitching “Colossal” with a still from the Toho-licensed 2014 Hollywood remake.